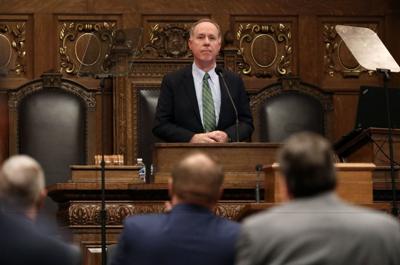 They won’t have the census data they need to reshape legislative and congressional voting districts until late summer or fall. But that didn’t stop Vos and Co. from lawyering up at public expense, hiring the Consovoy McCarthy and Bell Giftos St. John law firms. The last time Republicans who control the Legislature drew the maps to their partisan advantage a decade ago, the legal tab to the state treasury topped $2.5 million.

Thankfully, a Dane County judge slapped Vos’ big-spending and litigious hand last month. Judge Stephen Ehlke voided the contracts with the law firms April 29. He ruled that preparing for lawsuits over actions that haven’t even occurred is not a core power of the Legislature.

And in this case, no lawsuits at all should occur. Instead, Wisconsin should adopt Iowa’s proven model for drawing fair maps at virtually no public expense. That’s what a bipartisan group of Wisconsin lawmakers proposed last week. Most are Democrats, led by Rep. Deb Andraca of Whitefish Bay and Jeff Smith of Eau Claire. Democrats lack the power to force change. But two Republicans are on board: Reps. Todd Novak of Dodgeville and Travis Tranel of Cuba City. At least six Republicans have voiced support for nonpartisan redistricting in recent years. The deadline to join as cosponsors before the bill is introduced is Monday.

The vast majority of the public — Democrats, Republicans and independents — wants a neutral process for drawing voting districts before the 2022 elections.

County boards in 55 of 72 Wisconsin counties have approved resolutions seeking fair maps. Voters in 32 counties also have approved referendums in support. A statewide poll last year showed 70% of voters favor an end to gerrymandering. Only 20% of respondents said the Legislature should be able to skew the maps for partisan advantage.

Vos, the longest serving Assembly speaker in Wisconsin history, is unapologetic about gerrymandering for Republicans. It helps him stay in power. Similarly, former Illinois Speaker Michael Madigan — a Democrat and the longest serving legislative leader in modern U.S. history — remains a force for gerrymandering in his state, though he’s finally stepped down as speaker because of a bribery investigation.

Neither party deserves to undermine the will of voters and insulate themselves from public accountability by drawing voting districts into odd shapes that split communities of interest and protect incumbents.

Hallelujah! But why are we waiting until June 2 to ditch masks in Dane County?

Vos and most of his GOP colleagues appear determined to give their party an unfair advantage, just as they did 10 years ago. What’s different this time is that the Democratic governor can veto the Republican maps.

Tell your state senator and representative to support the Iowa model for nonpartisan redistricting. Find your lawmakers' phone numbers, emails and mailing addresses at go.madison.com/lawmakers. Or call the legislative hotline at 800-362-9472 during weekday business hours.

That means the courts will likely decide where the lines are drawn. It could be a three-judge federal panel or the state Supreme Court, which wisely and unanimously rejected a Republican attempt this month to rush redistricting lawsuits to the high court.

We have much more faith in the courts to ensure fair maps than we do lawmakers or the governor. But ultimately, passing the bipartisan Iowa model is best. It won’t cost millions of dollars in needless legal expenses. What it will do is prioritize fair maps for voters over the partisan interests of entrenched politicians.

Buying a firearm shouldn't be easier than voting

Bloomberg News: The US must do more to vaccinate the world

Jonah Goldberg: GOP: ‘Mostly peaceful’ for me, not for thee

Last summer, after months of protests and riots in response to the murder of George Floyd, the phrase “mostly peaceful,” often used by the med…

Jonah Goldberg: Populism is at the root of right wing’s conspiracy-mongering paranoia

PRAIRIE DU CHIEN — We love to win. And if we can’t win ourselves, we’ll let our sports teams do it for us.

Louisianans not abandoning their homes after multiple hurricanes