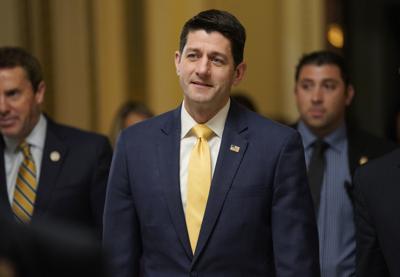 If Paul Ryan is worried about “liberal gerrymandering” following the 2020 census, he should support a nonpartisan process for drawing fair voting districts, such as Iowa’s good-government model. That way, neither the Democrats nor the Republicans can rig legislative and congressional maps to their favor.

Instead, the former speaker of the U.S. House of Representatives from Janesville is doubling down on gerrymandering that has helped his GOP. He’s joining the Republican State Leadership Committee’s fight to defend “right lines.”

Ryan will serve as a “key adviser” for the committee’s “Right Lines 2020” initiative. Ryan will help raise millions of dollars “to protect Republican legislative majorities ahead of the decennial redrawing of federal and state district maps,” according to the RSLC. Seven states are being targeted, including Wisconsin.

“After getting beat badly in 2010 and facing the consequences for nearly a decade,” Ryan said, “Democrats are not just focusing on federal elections, but are prioritizing state legislatures as well. They are doing so for one reason: redistricting. The threat this poses to the conservative principles that guide our country, and the policies that keep our families safe, healthy and working cannot be overstated. The RSLC is leading the fight to protect state and congressional districts from liberal gerrymandering, and I am proud to lend my full support to their mission of winning races up-and-down the ballot.”

Ryan certainly knows a lot about gerrymandering. The 1st Congressional District in southeastern Wisconsin, which he represented for 20 years, was surgically drawn by politicians to include his hometown of Janesville. That way, Ryan could represent a Republican-leaning district. At the same time, the neighboring 2nd Congressional District was drawn to include as many liberal communities as possible — not just Madison and Dane County, but also the Democratic stronghold of Beloit, for example.

OUR VIEW: He wants to fight in court for partisan advantage, but Iowa's model is best

The 1st and 2nd districts are now safe for incumbents Bryan Steil, R-Janesville, and Mark Pocan, D-Black Earth, respectively. In fact, despite Wisconsin being known as a swing state, none of Wisconsin’s eight congressional seats has been decided by less than double-digit margins over the last decade.

It doesn’t have to be this way. Iowa assigns a nonpartisan state agency to draw fair voting districts after every major census to adjust for population changes. The agency makes districts as contiguous as possible. Congressional districts follow county lines, rather than snaking into odd shapes. The nonpartisan agency is forbidden from considering the impact of its maps on political parties and incumbents.

That’s the kind of neutral system Ryan should demand so voters of all political stripes can better hold their elected representatives accountable.

Minneapolis Star Tribune: US must press to protect journalists

St. Cloud Times: Minnesota is on the verge of losing one-eighth of its voice in U.S. House

OUR VIEW: With high court declining to help, it's up to voters to end gerrymandering

OUR VIEW: His gerrymandered maps are wasting millions of public dollars in court