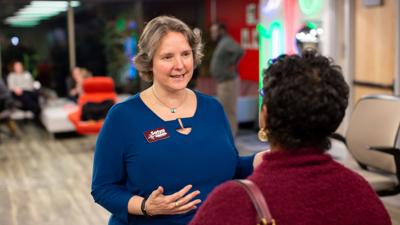 Madison is ready for new leadership.

Even Paul Soglin supported a change at the top last summer, announcing he would not seek re-election this spring. Having served as Madison’s mayor for 22 of the last 46 years in three stints, Soglin instead sought the Democratic nomination for governor.

“If I was not running for governor, this would still be the last term,” Soglin insisted last July. “I can assure you there will not be a third sequel.”

So much for that. Soglin abruptly changed his mind after finishing a distant seventh in the Democratic gubernatorial primary. And instead of praising former Madison City Council member Satya Rhodes-Conway, as he did last summer — calling her “far superior in every way” to other challengers seeking to replace him — Soglin is now dismissing her abilities.

Our State Journal editorial board met with both candidates, and we were impressed and surprised by Rhodes-Conway’s appeal.

The State Journal endorses Rhodes-Conway in the April 2 mayoral election.

Though politically she leans decidedly left, she pledged to scrutinize spending, such as the pricey renovation of the dilapidated Garver Feed Mill. She also wants the planned Public Market in Madison to cover its own operations.

Rhodes-Conway favors denser development, which we appreciate, particularly Downtown and near transit connections. Garage conversions and backyard cottages are additional ways to create more affordable housing, she said. Rhodes-Conway agreed that streamlining the city’s approval process for building projects is “absolutely” part of the solution to holding down the cost of housing, and developers need more clarity on what the city wants.

Other strong priorities include faster bus service (with a new strategy for seeking federal money), a vibrant State Street (without nitpicking promotional signs), and encouraging minority entrepreneurs (including businesses that add to and diversify the city’s nightlife).

As part of her job at a progressive UW-Madison think tank, Rhodes-Conway works with mayors across the country to improve cities.

Soglin counters that studying creative urban policy isn’t the same as implementing it. Soglin, 73, was key to getting Monona Terrace built and reviving Downtown. More recently, he responded to a troubling increase in fatal shootings by creating a peer-support team to stem violence. The approach appears to be helping.

Rhodes-Conway, 47, credits Soglin for his long tenure. So should the rest of the city. He has devoted most of his adult life to trying to improve Madison, and his gruff personality sometimes helps get things done.

But it also takes a toll. Soglin’s relationships with the Dane County executive and City Council are strained. While we appreciate his attention to public safety — including keeping police officers in Madison’s high schools — we’re worried his take-it-or-leave-it attitude toward the school district could sink the contract that allows the cops to stay.

Rhodes-Conway is smart and capable, saying she hates the “back-and-forth political games.” She’s disarming yet direct. She appears far more willing to collaborate. Rhodes-Conway would bring fresh eyes to stubborn challenges, and look for new opportunities.

If elected, Rhodes-Conway should avoid picking fights with the business community or heightening racial tension. She should strive to pull our city together.

Her opponent’s knowledge of the city and his legacy deserve respect. But Rhodes-Conway is the better choice to lead Madison into the future.

The State Journal's endorsement of Satya Rhodes-Conway was spot on.

Our endorsements in today's spring election

In this week's political podcast, Milfred and Hands play clips and comment on Satya Rhodes-Conway's endorsement meeting with the State Journal editorial board. Our board members were more impressed than they thought they would be with the wonky, progressive, think-tank manager who hopes to unseat "Mayor For Life" Paul Soglin, who is scheduled to meet with our editorial board next week.

Our endorsements for Madison City Council

The State Journal editorial board prioritized creativity, cooperation and communication skills is recommending candidates in the spring election

I like to think of myself as a rational person. If I have an employee who is doing an excellent job versus an applicant who says, “Fire that p…

This Midwest city is becoming a safe haven for climate refugees

This Midwest city is becoming a safe haven for climate refugees