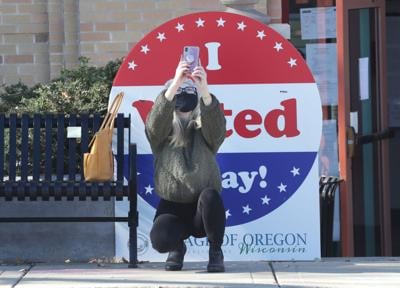 Massive fraud and voting irregularities did not occur in Wisconsin and did not cost former President Donald Trump the election here.

We are saying that definitively and emphatically — yet again — because of last Sunday’s elaborate report by State Journal reporters Chris Rickert and Riley Vetterkind, “In ‘thousands of complaints’ about Wisconsin election, few that could be substantiated.”

Wisconsin’s vote for president Nov. 3 was dutifully confirmed by county clerks across the state in an official canvas. It was further reinforced by recounts of ballots in Dane and Milwaukee counties. Judges rejected lawsuits challenging election procedures.

Rickert and Vetterkind went beyond those sturdy safeguards to address lingering claims and concerns about supposed fraud pushed by Trump and some of his staunchest supporters. Our reporters investigated reams of complaints from the public sent to top Republican lawmakers in Wisconsin.

The vast majority contained no specific allegations that the State Journal could even attempt to verify. Some were form letters generated by a conservative website. Some people merely repeated — without evidence — the former president’s ongoing contention that the vote was rigged.

Rickert and Vetterkind looked at 10,000 pages of emails send to lawmakers, which they obtained through a public records request. Our journalists were able to identify just 28 allegations of election fraud or other unusual circumstances that were detailed enough to try to confirm. Only one, involving just 42 votes, was partially substantiated.

Our reporters also interviewed dozens of prosecutors, election officials and complainants. What they found were minor administrative errors, second-hand rumors, and public misunderstandings about how elections are held.

In other words, last fall’s vote was fair and delivered the result that Wisconsin voters intended: Democratic challenger Joe Biden won the race for president in our state by more than 20,000 votes.

What's this? Cooperation at the state Capitol? More, please

That’s not to say that this or any statewide election is perfect. Problems always occur. And the pandemic had convinced most voters to cast absentee ballots either in person, through the mail or at a secured drop box.

The one complaint our reporters partly confirmed came from a Menasha woman. Nicole Granato compared publicly available obituaries with the state’s voter information website. She said she was able to find 42 people who voted early but who died before Election Day. Under state law, those votes should not have been counted.

But that doesn’t mean fraud occurred. People sometimes die in October, and absentee ballots could be filled out and returned weeks in advance of Nov. 3. State election officials get a list of people who die from another state agency. They check it against the state voter list. When they see a match, they alert local clerks to update their poll books. So a system is already in place to catch the problem.

Moreover, 42 votes wouldn’t have come close to changing the outcome of the race for president.

Madison and other tardy districts should finally open schools

Some bags of ballots were not properly sealed in West Allis after being removed from machines when the polls closed. But the clerk there insisted the mistake was “immediately corrected,” and no allegation of fraud was made.

A Racine poll worker asked some voters to confirm they were residents for 10 days, rather than the required 28. The law had changed. Despite the mistake, those same voters had to fill out paperwork that would have indicated 28 days were required.

Some people were suspicious of bags of absentee ballots being counted on Election Day — but that’s what state law requires. Absentee ballots can’t be counted in advance.

One poll worker in Watertown wasn’t asking voters she personally knew to show IDs. A clerk corrected the poll worker so IDs were always requested.

On and on, as our reporters carefully probed the complaints, specific allegations were easily explained, or they were minor, or they had already been fixed.

Instead of massive fraud and irregularities, what the State Journal’s investigation found was lots of attention by diligent poll workers to protect the integrity of the vote. All of Wisconsin should be proud of that.

Jonah Goldberg: For Democrats, a Senate conviction of Trump isn’t the point

The debate over whether to hold Donald Trump accountable for his role in the events that led to the siege of the U.S. Capitol has slipped into…

MILWAUKEE — As a Wisconsinite and business leader, I take pride in how our state runs elections and how much our fellow citizens value their r…

U.S. athletes told to use burner phones at Winter Olympics in Beijing

U.S. athletes told to use burner phones at Winter Olympics in Beijing