No, Robin Vos, you are the one being disrespectful
Share this 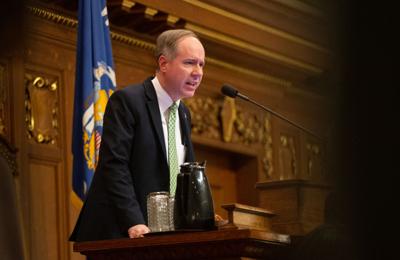 Government should run more like a business. That’s long been the refrain from Republicans, and often they’re right.

But if state government were a business, it would quickly accommodate a talented leader such as Rep. Jimmy Anderson, D-Fitchburg, who uses a wheelchair.

Vos doesn’t like to back down. But he should in this case by allowing Anderson to use a speaker phone or video conferencing to occasionally participate in meetings at the state Capitol when he is unable to attend for health reasons or because he can’t find a personal care worker to assist him.

In the private sector, the Americans with Disabilities Act almost certainly would require such flexibility. But the Legislature likes to play by its own rules, so Vos may be able to frustrate Anderson’s ability to do his job in ways a private business would not.

Rep. Jimmy Anderson, D-Fitchburg, said a rule requiring Assembly members to attend committee meetings in person discriminates against him because he has difficulty getting to some meetings for health reasons.

The ADA has its critics who view some of its provisions as excessive. Smart companies, however, understand that attracting and keeping talented employees is more important than ever, given Wisconsin’s labor shortage. So making the workplace accessible is good for business. Moreover, voice and video conferencing can improve efficiency and productivity.

Vos should have learned that lesson while running a popcorn business and managing properties, which he does when he’s not running the Assembly. Maybe he’s spent so much time in the halls of government he thinks bureaucratic rules must be enforced no matter what.

But the rest of the Assembly should force him to relent. Anderson’s request for an exemption from the Assembly’s requirement that members be present to participate in certain meetings is reasonable and should be granted.

We sit with Jimmy against OWI scourge

OUR VIEW: Man who lost family and ability to walk because of drunken driver should be powerful voice for change in Legislature

Vos claims it would be disrespectful for Anderson to ask a question over a speakerphone when citizens have taken time out of their day to attend and testify in person. Actually, it’s Vos who is being disrespectful to Anderson, who was paralyzed from the chest down in 2010 after a drunken driver crashed into his family’s vehicle, killing his parents and brother.

Anderson prefers to be at meetings but can’t always make it. No one at a public hearing should be offended by that. In fact, state senators are allowed to phone into meetings. Their constituents can decide if that’s OK, and so can Anderson’s.

Anderson brings lots of insight to legislative discussions. For example, his testimony on a bill to deter drunken drivers might help sway lawmakers such as Vos to treat operating while intoxicated more seriously.

Vos should grant an exception for Anderson, just as any good business person would.