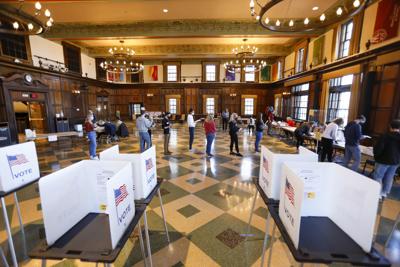 Last year’s election was a triumph for participatory democracy, with a record 74,216,154 Americans voting for Donald Trump, and blessedly, an even larger record of 81,268,924 choosing Joe Biden. Now comes the new battle: fighting for advantage for next time. We side with expanding the franchise.

Republicans, having lost the last White House round (along with the House and Senate), are pushing hundreds of bills in nearly every state capital to limit or restrict voting. As of a month ago, the Brennan Center at NYU Law School flagged 253 bills in 43 states.

The Democrats, in charge in Washington, are proposing to broaden voting access with federal legislation that has passed the House. The GOP charges it’s an effort to boost turnout among minority voters (which actually is admirable and should be encouraged).

Another war is over redistricting, using the results of the 2020 census. Each side smears the other with partisan gerrymandering and they are both right, leading to the perversity of politicos picking their voters instead of the other way around. Much more to come on that front.

Still, even with those higher turnouts, the nasty polarization of the Trump years has been damaging. Freedom House, a nonpartisan group founded during World War II to promote liberty around the globe, conducts an annual Freedom in the World ranking, from Finland’s perfect 100 down to Syria’s score of 1. In 2010, the U.S. had a 94 across the host of measures. In 2020, America had slipped to 83, right next to Romania and Panama. No aspersions intended toward an ex-East Bloc prison house or a former banana republic, but that’s really embarrassing for Abraham Lincoln’s last best hope.

Something good that came out of Trump is that the crazy theories of voter fraud have been demolished. Dozens of courts and judges across the country, federal and state, have said it’s not true. The dead just aren’t voting.

Now, even the craziest of the crazies, attorney Sidney Powell, being sued for $1.3 billion in defamation damages by election machine maker Dominion Voting Systems, is trying to run away from what Sidney Powell said. Her lawyers state that her lurid, detailed descriptions of stolen votes, and rigged ballots, and long-buried Venezuelan dictator Hugo Chavez controlling the Pennsylvania election outcome from the grave, was protected free speech and “reasonable people would not accept such statements as fact but view them only as claims.”

So it’s all just Powell’s opinion, like the opinions appearing on opinion pages every day. But those opinions are based on facts. Powell had no facts except that Trump had lost the election and she wished he hadn’t.

Another unexpected benefit created last year, this time from COVID-19, was the tremendous growth of voting by mail, even after it was falsely tarred as dangerous by Trump. Vote by mail is actually easy and secure and boosts turnout. What’s great now is that Biden has nominated Amber McReynolds, a leading expert on vote by mail, to the Postal Board of Governors. Excellent on top of excellent.

Now we have to get America’s freedom ranking up to 100.

Los Angeles Times: Biden's infrastructure plan is even more ambitious than it seems

Here’s an indication of just how poorly the United States is doing when it comes to building and maintaining roads, bridges, water systems and…