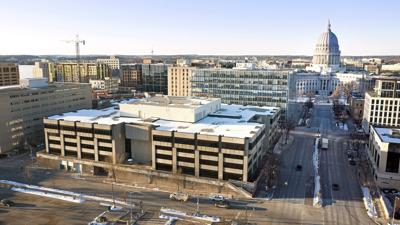 Officially, it’s called the General Executive Facility, or GEF 1, pronounced “Jeff 1” by the countless state workers who have served behind its concrete walls, which resemble a prison.

Mr. Evers, tear down GEF’s walls — and everything else that goes with it. Build something better, which should be easy.

To his credit, Gov. Tony Evers appears ready to do just that, with bipartisan support.

The Wisconsin Historical Society just announced promising plans to build a long-awaited $120 million state history museum on this prime and underutilized site just one block off the Capitol Square. Past governors — Republicans and Democrats — have endorsed $70 million for the museum, with private fundraising adding $50 million to the noble cause.

Originally, the modern museum was proposed for the top of State Street where the existing, cramped and outdated state history center now stands in a former hardware store. But that proposal was complicated by plans for a larger private development that would have surrounded the new museum.

The new location, where GEF 1 stands now, should make it easier and faster to gain approval and break ground. The new museum will provide the public with world-class history exhibits, gathering spaces and distance-learning technology. It’s expected to attract 150,000 visitors a year and double student visits to 50,000. Downtown Madison would have another draw.

The museum could be coupled with modern office space or other uses. And if some of the large GEF 1 property held private office space, it could add to the tax rolls. The state plans to seek an architect and engineering team soon. Evers could announce more detail during his state budget address next week.

All of this is exciting. But most delicious will be the demolition of GEF 1, an eyesore of concrete built in what is aptly called Brutalist style. GEF 1’s windowless first-floor walls deaden the streetscape on all sides. Its boxy and heavy design is dreary and cold. No one would want to walk past or into its 271,493 square feet of office space unless they worked there or had state business inside. The building houses the state Department of Workforce Development and a two-level underground parking garage.

Those important state functions can find new homes, either with the new museum or on a less prominent site.

And state officials shouldn’t stop there in improving its facilities. GEF 2 and GEF 3, which are neighbors of GEF 1, date to 1978 and 1980, respectively. They don’t look much better.

Their days should be numbered, too.

Biden should require employers to vouch

for the legal status of people they hire

A "fait accompli." That's what the second impeachment trial of former President Donald Trump is being called by many in the media and on both …

Shouting matches and expletives creating turmoil at 30,000 feet pose a serious danger to airline crews and passengers. While there have always…

Tommy Thompson: At least 75% of classes in person is UW System's goal for fall

In a traditional university setting, students learn and grow through their interactions with peers and faculty. This sort of engagement — in a…

Dave Cieslewicz: How to lift 10 million kids out of poverty

A provision that would do more to reduce poverty than anything since Medicare will likely become law within weeks. And it will happen because …

Farah Acher Kaiksow and Kristin Brunsell Merss: Delaying shots for prisoners would be inhumane and unethical

We were disheartened to hear of continuing efforts in the Senate to delay vaccination of people in Wisconsin’s correctional facilities, in dir…

STATE JOURNAL VIEW: Senate Bill 55 would obscure important decisions -- some of them pending

The pandemic has dealt a special blow to all retail. But the boarded-up windows on State Street in Madison, now mostly gone, have kept people …

Berkeley teacher won't go back to school, but daughter can go to private preschool

I encourage others to join me in enthusiastically supporting the Wisconsin Historical Society’s plan to build a new state history museum. We’r…

Biden calls for peace and calm after MN shooting

Biden calls for peace and calm after MN shooting