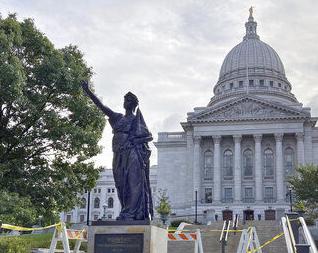 Hello, Miss “Forward,” and great to see you, Col. Heg. Welcome back! We’ve missed you both and the noble causes you stand for on the Capitol Square in Madison.

Workers on Tuesday reinstalled the tall bronze statues of “Forward” and Hans Christian Heg at the ends of State and King streets, respectively, following painstaking restoration over the last year.

Just as exciting: They may soon have some welcome company.

A mob tore down the two statues — symbols of progress and sacrifice — on June 23, 2020, in a misguided attempt to protest a legitimate arrest. An unruly 29-year-old man had intimidated diners with a baseball bat and bullhorn inside a restaurant on the Square before struggling with police and fleeing a police car. The man pleaded guilty to disorderly conduct, resisting arrest, criminal damage to property and extortion.

The man’s arrest led some in an angry crowd to tear down the statues, attack and injure a state senator, and start a fire at the City-County Building that caused the 911 Center to shut down.

Madison and other cities had been experiencing weeks of protest over the shocking police killing of George Floyd, an unarmed black man in Minneapolis. But the violence and destruction in Downtown Madison on June 23, 2020, did nothing to promote racial equality or an end to police brutality. Instead, the senseless attacks undermined those noble causes.

Heg was an enormous figure in early Wisconsin history. He protected fugitive slaves, pressed the state for prison reform and sacrificed his life for emancipation during the Civil War.

The rioters tore down, decapitated and dumped his likeness in Lake Monona.

“Forward,” the beloved female figure extending her arm in the air, had encouraged progress for more than a century and became a symbol of women’s rights.

The rioters toppled and vandalized her, too.

Credit state officials for their determination and cooperation in bringing the statues back to their rightful places. And thank Venus Bronzeworks, a contractor, for making Heg and Forward look as good as new.

These statues now hold added significance. They stand for the resilience of our democracy. Mobs don’t get their way in Wisconsin. The people, through their elected representatives, determine how we move forward.

In that tradition, a state committee is close to approving another statue for the Square, this one honoring Vel Phillips, a trailblazing African American leader from Milwaukee. She’ll make a fine addition to Heg and Forward.

May the trio of proud figures inspire state residents and visitors for generations to come.

S.E. Cupp: Biden is a frenemy of our experts

He made the promise over and over again. During his run for president, and amid a worsening COVID-19 crisis, Joe Biden promised if elected, he…

Texas recently enacted the most restrictive abortion ban in effect today in the United States. The law bans abortions as early as six weeks, m…

Esther J. Cepeda: We all have our blindspots when it comes to race

Ramesh Ponnuru: The US debt limit constrains nothing but honesty

John Thune of South Dakota, the second-ranking U.S. Senate Republican, says that “the debt limit needs to be increased.” He also says Republic…