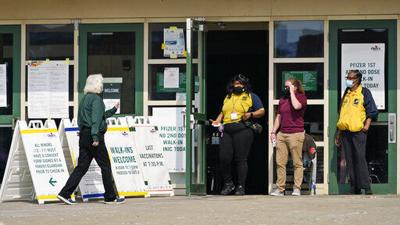 Jonathan Carlyle of Toledo, Ohio, had every intention of getting a COVID-19 shot — someday. The Amazon delivery driver was so busy that he kept putting it off. Then he learned that his state was launching a weekly lottery that would award $1 million to some lucky person just for getting vaccinated.

“As soon as I heard that, I was like, ‘Yes, I need to go do this now,’” he said Thursday during a press conference with Ohio Gov. Mike DeWine. Carlyle received the one-dose Johnson & Johnson COVID shot two days after learning about the incentive, and it was a good thing he didn’t wait. On Wednesday Carlyle found out he was the second winner of Ohio’s “Vax-a-Million” lottery.

No one can say for sure how many Americans would be motivated to get a shot by the prospect of a big payday or some other financial inducement, as Carlyle was. More than a third of U.S. adults have yet to be vaccinated for COVID-19, and surveys have shown an array of reasons why people haven’t signed up for their shots.

But several states, businesses and the federal government are betting there are more than a few people in Carlyle’s camp.

In recent weeks, they have rolled out million-dollar lotteries, full-ride college scholarships and all manner of freebies such as beer, sports tickets and even guns to reach fence-sitters. California launched its own version last week, Vax for the Win, which will give away $116.5 million to vaccinated residents through $1.5-million payouts, smaller weekly jackpots and $50 gift cards. President Biden this week announced a monthlong push by his administration to boost vaccinations that includes touting a handful of business incentive programs, as well as expanded vaccination hours at pharmacies and free child care.

If this sounds like desperation, that’s because it is. The pace of daily COVID-19 vaccinations has waned from earlier this year, down to 1.1 million a day from a high of 3.4 million. About 63% of the adults in the U.S. have received at least one COVID-19 shot, but experts say the U.S. needs as much as 80% of the population fully inoculated to reach “herd immunity,” the point at which enough people have protection that a virus can’t spread effectively.

A certain number of people don’t plan to get a shot, no matter the inducement. Some can’t get inoculated for medical reasons and others won’t because they are misguided about the safety of the available vaccines. There’s not much that public health programs can do to change the minds of the latter group.

But data suggests programs aimed at those who aren’t philosophically or politically opposed to the vaccine, but for whatever reason just haven’t gotten around to getting a shot, can be moved.

The week after Ohio rolled out its lottery, its vaccination rate increased 28%. And in an ongoing UCLA COVID-19 health and politics study project, about one-third of unvaccinated respondents to a survey said that a cash payment would make them more likely to get a COVID shot.

Some have criticized the lotteries as a waste of money that could be put to better use, such as helping businesses recover from a year of pandemic restrictions. But if the prizes do move the vaccination needle, what could be a better use of those dollars than saving lives (not to mention cutting healthcare costs) while protecting the county’s economy from a fresh outbreak? Besides, Biden is encouraging states to use some of the federal aid they received from March’s big COVID relief bill for incentives to get people vaccinated.

Ideally, people wouldn’t need a cash carrot to do the right thing — protection from a deadly disease would be motivation enough. And though these gimmicks are no substitute for proven methods of increasing vaccination uptake, such as ensuring easy access to vaccine clinics and clear and consistent messaging, if a free Bud Light or lottery ticket helps to nudge some folks off the couch and into the vaccine clinic, then it’s worth trying. We could do without supplying the world with more firearms, however.(tncms-asset)7e80bada-5fb1-11ea-8316-00163ec2aa77[0](/tncms-asset)