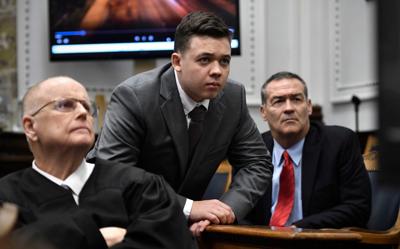 This wasn’t the message Wisconsin or our nation needed to hear, even if the jury correctly followed the law.

Teenager Kyle Rittenhouse was acquitted on all charges Friday in the fatal shootings of two people — Joseph Rosenbaum, 36, and Anthony Huber, 26 — and the wounding of Gaige Grosskreutz, now 28, during a chaotic night in Kenosha on Aug. 25, 2020. The deadly violence followed protests, rioting and arson in response to the police shooting of a Black man, Jacob Blake, by a white officer.

The disappointing verdict is sure to embolden militant people who seek to take the law into their own hands. It also could increase and complicate self-defense claims if more people carry — and use — firearms in the streets. That’s a scary prospect.

But further violence in response to the verdict won’t help anyone. Our civil society must remain calm — in Kenosha, in Madison and across the country.

Rittenhouse is no hero, as some of his defenders pretend. He behaved like a vigilante and didn’t deserve to walk free, given his recklessness. Yet the law, unfortunately, skews in favor of shooters who claim self-defense. That needs to change.

Rittenhouse, then 17, wasn’t making anyone safer by parading through crowds of angry people with a semiautomatic rifle strapped to his chest and, according to prosecutors, pointing it at people before the conflict escalated.

What Rittenhouse and other gun-toting, self-appointed “protectors” of Kenosha needed to hear from our court system is that they are not the judge and jury when things go awry. The answer to unrest, including the torching of homes and vehicles, is a well-trained police force and the National Guard.

Rittenhouse, of Antioch, Illinois, only complicated the difficult job of law enforcement by showing up armed in Kenosha, where some of his relatives lived.

One of the men Rittenhouse killed (Rosenbaum) was acting odd and aggressive when Rittenhouse shot him. Another victim swung and hit Rittenhouse with a skateboard after Rosenbaum was shot. The third victim had a gun.

But Rittenhouse wasn’t an innocent bystander, and some of his victims assumed he was an active shooter who needed to be stopped, prosecutors said. Rittenhouse was engaging passersby with his abrupt and threatening behavior. Much of the case hinged on whether Rittenhouse had provoked the others. If carrying an AR-15 down a crowded street isn’t provocative, what is?

Rittenhouse even got off on a gun charge despite getting his weapon from a friend because he couldn’t legally purchase it. Blame the state Legislature, not the judge who dismissed the charge, for that.

Wisconsin law allows teenagers to carry firearms for hunting. But the statute is so convoluted that Rittenhouse’s lawyers were able to convince the judge that Rittenhouse could legally carry his long rifle in an urban setting where hunting isn’t allowed.

The Legislature must fix that law so immature people don’t cause more bloodshed. An untrained teenager with a semiautomatic weapon puts everyone — including police — at greater risk of conflict and harm.

The Legislature also should narrow the law that allows people to openly carry firearms. If Rittenhouse had not been flaunting his rifle, he wouldn’t have attracted so much attention, and this tragedy could have been avoided. It’s not like he was defending his home or property.

If Rittenhouse was justified in his actions, how does that apply if two people openly carry guns and point them at each other? Whose self-defense claim takes priority?

Our state should be discouraging standoffs with guns, rather than encouraging more people to arm themselves out of fear or revenge.

Policymakers, more than any jury, are in a position to set clear and reasonable rules.

The jury was under enormous pressure to decide a complicated case after hearing more than 30 witnesses over eight days of testimony. They had to follow the law as written and the instructions of the judge.

Did Rittenhouse face an unlawful threat that night in Kenosha, and was his use of force reasonable and necessary? The jury ultimately answered “yes,” and we respect their decision — even though we don’t like it.

Responsible citizens who want to discourage similar tragedies should pressure their elected leaders for smarter gun laws. We the people, through our democracy, must demand that this troubling saga never happens again.

Good fortune (or dumb luck) shined on Kyle Rittenhouse -- not once, but four times during his recent trial.

The Kyle Rittenhouse trial is over. The jury carefully deliberated. But who among us wouldn't want the Kenosha assistant district attorney pro…

Laws are not based on feelings -- Roger Johnson

Lest we forget, the trial of Kyle Rittenhouse should be a reminder to all.

Vigilantism saved the day on United 93 during the Sept. 11 attackes. But in virtually every other case, it’s a disaster.

Would police be kind to Black teen? -- Ira Kastenberg

A number of letters to the editor have appeared in the State Journal recently about the Kyle Rittenhouse case. Most of them disagree with the …

A lot of finger-pointing immediately following the Rittenhouse trial. People criticized the judge, the prosecutor, Wisconsin’s gun laws and th…

After the stupefying verdict in the Rittenhouse murder trial, the Wisconsin State Journal followed up in the Nov. 20 paper with an AP article:…

The verdict in the Kyle Rittenhouse case makes us all less safe as it sanctions vigilantism.

It is dangerous to demand justice -- Babette Wainwright

After a police officer shoots a Black man in the back, fair-minded people gather demanding justice. A privileged white teenager comes in from …

I think Lady Justice is weeping for this country right now after viewing the Rittenhouse trial.

If an unarmed protester fails to submit to an armed civilian’s order to halt, can he shoot? It seems so.

Kits are proliferating, yet Republicans still

Bringing a gun to a riot isn't wise -- Valerie Leffler