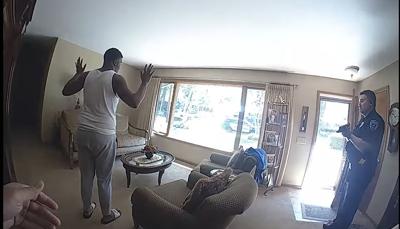 Jacob Blake was shot seven times in the back last week by a Kenosha police officer — a chilling and excessive use of force that sparked days of protest, rioting and destruction.

Millions of people have seen a bystander’s video that captured the moment from across the street. An officer grabbed the back of Blake’s shirt and repeatedly fired his gun, critically injuring Blake as Blake leaned into an SUV carrying his children.

Another video recorded by an onlooker from a different angle shows Blake struggling with officers, apparently on the ground, then walking around the SUV and being repeatedly shot.

Both videos are brief. What isn’t shown are the events leading up to the shooting. Was Blake trying to help break up a domestic dispute, as his lawyer contends? Or was Blake armed with a knife and fighting officers, putting one in a headlock, before shrugging off attempts to stun him, as the police union insists?

Body cameras on the Kenosha officers could have shown with much more clarity and length what happened, without having to rely on conflicting accounts and blurry cellphone images taken from a distance.

But the Kenosha officers — including Rusten Sheskey, who pulled the trigger — weren’t wearing cameras on their uniforms, which is something far too many law enforcement agencies fail to do, including Madison’s police force. In fact, a survey by Lee Enterprises journalists of 80 police agencies across the Midwest found more than half — 43 — don’t use body cameras to increase transparency, accountability and public safety. And 13 of the 80 departments contacted by Lee reporters in Wisconsin, Indiana, Minnesota and Illinois don’t even have cameras mounted in their patrol cars.

That needs to change, especially in Madison, where the City Council has dithered for years over whether to adopt body-worn cameras. Not even a limited and inexpensive test of uniform cameras on the North Side could garner enough council support to proceed.

Instead, council members are touting a civilian board and independent monitor to try to hold its diverse and professional police department more accountable to the public. But without clear evidence from body cameras — showing what really happens during controversial interactions — the city will be left with conflicting stories that breed distrust and can lead to multimillion-dollar lawsuits.

Kenosha News: Kenosha didn't deserve this. No city does

Critics of cop cameras often point out the obvious — that they’re not a panacea. But neither are the civilian board and independent monitor. Nothing by itself will fix every problem with law enforcement, our society and racial strife.

What body-worn cameras on patrol officers will do is improve investigations into allegations of wrongdoing by officers and the public. They will provide hard, unbiased evidence of troubling events, improving the delivery of justice.

In the wake of Blake’s tragic shooting and subsequent gun violence that killed two people, Kenosha leaders are pledging to equip officers with uniform cameras, something that’s been stalled for years. So is Kenosha County. So should Madison.

The cameras can automatically turn on and off, depending on the type of call officers are responding to. That should prevent officers from turning cameras off to hide bad behavior. The state Legislature recently defined how and when police video must be released to the public, with reasonable exceptions for privacy. That should streamline the process for storing files and responding to open records requests.

Cop cameras have the potential to improve the behavior of police and the public when everyone knows they’re being recorded. That should lead to better outcomes. And when it doesn’t, the public and investigators will have much more and better evidence to judge what happened and who is at fault.

Chicago Tribune: Heading into Labor Day, Chicago mayhem is out of control

I heard a strange rumor recently that people are out there, far, far away, who don’t spend the majority of their time thinking about politics.…

Kathy Wilkes: Not much to celebrate this Labor Day because workers need more power

Labor Day doesn’t have much for us everyday wage earners to celebrate this year. We’re struggling to pay bills and keep safe as COVID-19 runs …

Cynthia Tucker: Whether by mail or in person, please vote

Eric Frydenlund: How to find gratitude in a chaotic world

PRAIRIE DU CHIEN — I have a cynical sense of humor. I once sent a sympathy card to a relative who was getting married. She did not appreciate …

Shortage for the fall election is a brewing

Leonard Pitts Jr.: Kyle Rittenhouse is not a hero

Kyle Rittenhouse is not a hero.

Minneapolis Star Tribune: Next up in COVID times: The NFL

It’s a minor injustice of the pandemic — emphasis on “minor,” because there are clearly more significant ones — that the disruption occurred d…

'Herd immunity' strategy comes with no

OUR VIEW: The Madison City Council must do more to help smashed and looted stores

S.E. Cupp: Are we really prepared for Trump's refusal to accept the election results?

“We have to win the election,” President Donald Trump told a crowd of sometimes maskless supporters in Oshkosh back in August. “(M)ake sure yo…

Doug Bradley and Greg Hutchins: How to encourage good citizenship the 4-H way

Dahleen Glanton: Trump and police unions are an unholy alliance

CHICAGO — Every city and town in America is on edge. We look at the social unrest across the country and wonder what it would take to make it stop.

Leonard Pitts Jr.: Trump's many lies no longer shock us

We weren’t going to normalize this.

Candidates should be clear, emphatic about

Jim Palmer: Police agree on the need for change

Despite deep and longstanding divisions in this country, a majority of Americans — both Republicans and Democrats— agree that policing needs m…

Masood Akhtar: Why do Blacks pay the highest price?

OUR VIEW: Despite health concerns, the Big Ten is right to kick off the season for sports-hungry fans

Timothy Thompkins: I am a Black man from Kenosha who believes in a united America. President Trump does not.

KENOSHA — When I was in the Marines, we lived by a credo: “one team, one fight.” We had our disagreements, but we were Americans first.

Racial integration and political polarization are a combustible combination

Jillian Peterson and James Densley: Why mass shootings stopped in 2020 — and why they are roaring back now

Mass shootings, which had become far less frequent in 2020, have come roaring back. On Monday, a gunman opened fire at a grocery store in Boul…

Denver Post: Chaos and death while grocery shopping doesn’t have to be Colorado’s story

A headline in the Washington Post put it this way: “Policing is not really on trial in Minnesota. That’s too bad.” Too bad? To the contrary, t…

Minneapolis Star Tribune: A verdict that must change America