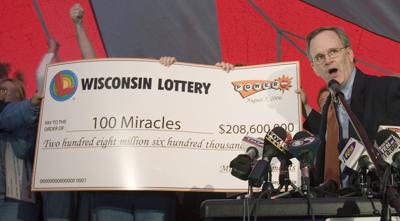 Assembly Speaker Robin Vos, R-Rochester, is unwittingly demonstrating the importance of open government in a way that just about anyone can appreciate. He’s behind a bill that would make the names of lottery winners secret.

Talk about an invitation to corruption.

The lottery cannot succeed without trust. People will gamble their hard-earned dollars only if they think they have a fair chance to win. If they suspect the deck is stacked against them or that the house is cheating, they’ll try to get rich quick some other way.

“Trust us, someone won, and it was totally fair” isn’t good enough. All it takes is one corrupt lottery official or store clerk to help his buddies take home big prizes. Such corruption has been discovered before in cases of store clerks — who get a slice of the winnings — having ties to frequent winners. Such investigations are possible because winners’ names are public. When the same name keeps popping up, it gets suspicious.

Vos argues that transparency creates an unreasonable burden for winners because scammers and the media harass them. He points to Manuel Franco who won a $768 million Powerball prize. Franco claims it got so bad he had to go off the grid and couldn’t come out of hiding to testify in person for the secrecy bill.

Yet neither Franco nor Vos provides specific problematic incidents of harassment. Indeed, Franco would not have received so much attention if he hadn’t gone out of his way to gain exposure. He held a press conference to announce his win and spent Mother’s Day handing out $200 gift certificates at a Chicago Target.

We don’t doubt becoming instantly rich comes with some headaches. Some lottery winners have been preyed on. Some have lost everything. Not that the winners are blameless. Many of those cautionary tales of lost millions feature winners who didn’t take reasonable precautions to protect their new wealth.

To truly understand the need for transparency, ask yourself a couple of questions: Would you buy a lottery ticket if the winners were secret? The odds are it won’t be you, so do you trust all of those retailers and lottery officials with the potential power to cheat not to do so?

Transparency and the public’s right to know are bulwarks against corruption. Speaker Vos shouldn’t tear them down because lottery winners find it annoying.

Bill Lueders: Tony Evers can do better on openness

Early in his administration, Wisconsin Gov. Tony Evers was asked to produce a letter he’d gotten from departing Gov. Scott Walker, during the …

Mass shooting on Kenosha's north side

Mass shooting on Kenosha's north side