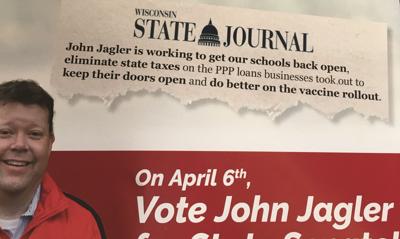 The Wisconsin State Journal editorial board did not endorse Jagler, R-Watertown, for state Senate in the April 6 election, no matter how much the state party wants to pretend we did.

The party recently sent a devious campaign flyer to voters in the 13th Senate District featuring the State Journal’s logo next to glowing praise for Jagler. The obvious implication was that the State Journal was backing Jagler and encouraging others to support him.

But the words were Jagler’s, not ours. The Republican Party took sentences from a candidate questionnaire that appeared in the State Journal and changed some of the wording to third person. That way, instead of Jagler saying nice things about himself, it sounded like the State Journal was touting his record.

We weren’t. And the party didn’t have permission to use our logo. Nor should it have misrepresented our editorial board’s views.

So much for Republicans being the party of personal responsibility.

Even if Jagler didn’t know about the misleading flyer, which is doubtful, he should have publicly called on the party to stop using it after we called his attention to it. Instead, he has ignored our concerns for days, hoping the embarrassing episode would blow over.

The other candidates in this special election for a vacant Senate seat are Democrat Melissa Winker and independents Ben Schmitz of the American Solidarity Party and Spencer Zimmer, who is running as a “Trump Conservative.” The 13th District includes most of Dodge County, the northern half of Jefferson County, and the edges of northeastern Dane County.

Please vote April 6 knowing that the State Journal has not endorsed Jagler. His silence is reason enough to favor someone else.

Vote 'no' to a full-time Madison City Council

Methane is a short-lived but powerful greenhouse gas and the second-largest contributor to climate change after carbon dioxide. And the majori…

Jagler must answer to press and voters -- Richard Brouillard

The State Journal is right to challenge the Wisconsin Republican Party and Rep. John Jagler, R-Watertown, for their unethical use of the newsp…

GOP is up to old tricks with Jagler -- Kurt Stege

The Republican Party recently sent a mailer that incorrectly suggested the State Journal had endorsed Rep. John Jagler, R-Watertown, in his bi…

calls for resignations more than anything

John Kass: Biden called for border surge, and now he owns it

On the disaster at our southern border, I find myself, oddly, in agreement with Democrats and their media mouthpieces who are so desperately d…