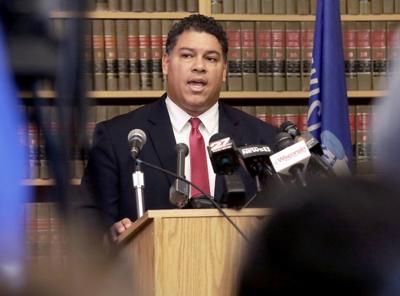 If the protesters chanting slogans and yelling profanity at Dane County District Attorney Ismael Ozanne late into the night outside his home don’t like the job he’s doing, they have much better options than disturbing the peace.

Ozanne is up for election this fall. If his critics were serious about opposing him, they could have found a candidate to run against him. Instead, he is unopposed, and they haven’t organized a write-in campaign.

Ozanne has offered to meet with the protesters — during work hours, away from his home — to discuss his charging decisions and racial inequities in the judicial system. Ozanne is Wisconsin’s first Black district attorney, and he grew up in a civil rights family. So he brings a lot of credibility and insight to the challenge.

But instead of working with him to try to improve the courts, or working to elect someone else they think would do a better job, the rowdy protesters who have twice targeted his family home this month have resorted to harassment and intimidation.

Not only is that wrong and unacceptable, it also hurts their cause with the public.

Elected officials already get plenty of grief for making difficult decisions that rarely please everyone. They shouldn’t have to put up with threatening behavior as they’re putting their kids to bed. Other public officials have been subjected to similar treatment.

“One of my daughters turned to me and asked why you chose to come to our house to make her feel unsafe, when you claim that you want everyone to feel safe,” Ozanne wrote in an open letter to the protesters.

The protesters are demanding Ozanne drop charges against two Black men. One is accused of looting a jewelry store on State Street and using his vehicle to help pull down a statue on the Capitol Square. The other is charged with making threats at a Downtown bar.

Ozanne agrees that government must do more to reduce incarceration, the root causes of crime and shootings. But he also became district attorney to keep people safe, hold criminals accountable and protect crime victims.

“Your protest was about trying to intimidate me and my family so I would drop the charges against people who have been arrested for crimes committed under the cover of what have largely been peaceful protests in the city and county I grew up in and have lived in,” Ozanne wrote. “Your protest was about you trying to intimidate me into not doing my job unless I do it the way you think I should do it. You are not going to be successful.”

He’s right, and Dane County should support his strong stand.

John Kass: What happened to an America where you could freely speak your mind?

The angry left-handed broom of America’s cultural revolution uses fear to sweep through the our civic, corporate and personal life.

Our hearts are with the protests sparked by the killing of George Floyd, which continue in the streets of American cities. They aim to shine a…

In 2016, Jeb Bush called Donald Trump the “chaos candidate.” Trump promised to hire only “the best people.” Bush was right.

Journalists must report in the public interest, not in the service of government

The Detroit News: If it’s safe, get students in school

Two of 274 students tested were positive,

Sen. Howard Marklein: The fair must go on -- with precautions

Here are some questions for parents to ponder:

Racial integration and political polarization are a combustible combination