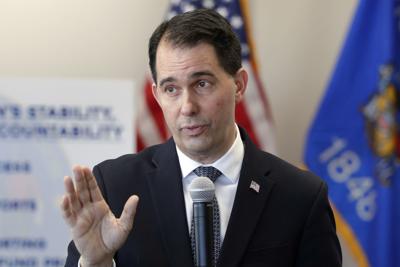 Suppose someone you know is making $46,000 a year while carrying $300,000 in debt. He borrows to cover interest payments while his debt and spending continue to grow.

“I think any of us here, if that was a friend or a family member, we would have an intervention,” Walker told the Milwaukee Press Club. “We would intervene with them and say, ‘Something has got to happen. We (have) got to help you get this budget under control.’”

Walker’s analogy is powerful and apt. The United States is expected to have $4.6 trillion in revenue with $30 trillion in debt by 2025, according to Congressional Budget Office projections he cited.

“I kind of put the blame on all of them,” Walker said of leaders in Washington.

The national debt doubled from $5 trillion to $10 trillion under former Republican President George W. Bush, Walker noted. Then it nearly doubled again to $19.5 trillion while Democratic President Barack Obama was in office.

Being ever so careful not to mention President Donald Trump by name, Walker noted the federal debt has now grown to $23 trillion and will approach $30 trillion in five years.

Walker makes a strong case for action. Unfortunately, his proposed solution is gimmicky and, worse, could expose the U.S. Constitution to rewriting.

Walker now works for the Center for State-led National Debt Solutions. The group wants the states to call an unprecedented constitution convention, at which delegates would endorse a constitutional amendment requiring a balanced federal budget.

Walker said 28 of a required 34 states have called for such a convention, including Wisconsin. If such a convention were held, a majority of delegates could send proposed amendments to the states, three-quarters of which would have to ratify any changes.

The Center for State-led National Debt Solutions on Monday announced Walker will serve as its National Honorary Chair.

Walker contends a convention could be narrowly contained to just a balanced budget amendment. But scholars warn such a convention could quickly expand, allowing dramatic alterations to the nation’s founding document and individual freedoms.

Even if Walker is right and only a balanced budget amendment would result, then what? Who would make our leaders in Washington cut spending or raise taxes? The courts? Does Walker really want judges micromanaging the federal budget?

A much better solution is for voters to elect leaders who can work across party lines and compromise on budgets that balance spending with receipts.

Walker is right that Washington needs an intervention. But his proposed amendment won’t work.

The intervention that’s needed is with Trump and both partisan sides in Congress. Voters can intervene in 2020 by demanding fiscal sanity from those who seek their votes.

Amid the theatrics of impeachment and opposition to impeachment, both parties took the time over the past two weeks to do what they always do:…

The former Republican governor said he would endorse his former lieutenant governor should she run in 2022.

Opening up our most sacred civic document to the vicissitudes of a convention would be a huge mistake, especially now

It is extraordinarily rare that I agree with anything that comes out of either side of Scott Walker's mouth. But these are extraordinary times…

Trudy Rubin: Why the laughter at Trump at the NATO conference wasn’t funny

They were laughing at him, and it made President Donald Trump angry.

CHICAGO — It’s hard to exaggerate the viciousness of what Michael Vick did. While playing for the Atlanta Falcons, the star quarterback financ…

We are not who we think we are.

OUR VIEW: Rushed impeachment won't remove failed president from office, but election should