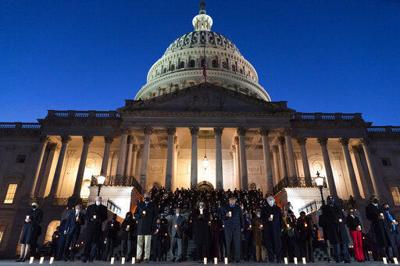 A bipartisan team of state lawmakers wants to encourage more cooperation in Congress by requiring candidates to earn broader support from Wisconsin voters.

That’s a great idea, given how much partisan politics has slowed Washington’s ability to get even popular and basic things done, such as fixing highways or simply passing a budget.

A big part of the problem is that primary elections often devolve into ideological purity tests. The most rigid Republican candidates and staunchest Democrats have an easier time winning the most votes among a narrow slice of true believers who turn out for party primaries.

Ranked voting can change that by giving voters across the political spectrum more say — and choice — in who Wisconsin elects for federal office.

Instead of candidates having to impress their party’s most intensely partisan supporters, all candidates for a U.S. Senate or House seat would compete in the same primary, with the top five vote-getters advancing to the general election. Voters would then rank those five in order — from their favorite down to their last choice — in the November election.

If none of the five finalists wins at least 50% of the vote in the general election, an instant runoff occurs. The candidate in last place is then eliminated, and any of that candidate’s supporters who indicated a second choice would have their ballots count for their second choice. This process would continue until a winner got to 50% of ballots.

And if voters didn’t want to rank their candidates, they could still vote for just one as they do now. They just wouldn’t get as much say if their candidate lost.

“Politics is hyperpartisan,” Kooyenga said. “It is a lot of bomb throwing. It is not very productive, and the vast majority of people are turned off. The system as it’s currently designed rewards behaviors in the tail of bell curves. What this reform does is it gives a broader segment of our population … a say in who the representatives are.”

Ranked voting also could bring more attention to third-party candidates, because potential supporters wouldn’t feel like they were throwing away their votes. Yet ranked voting would limit the power of spoiler candidates, who couldn’t easily syphon votes from a similar opponent. And anyone who wanted to win would have to appeal to a wider swath of Wisconsin’s electorate, not just their base.

Wisconsin should give ranked voting a try for congressional seats and, if voters like it, extend it further to state and local races.

Orlando Sentinel: A tough and good decision by Florida to rein in the spread of exotic snakes and lizards

Ranked voting is a light in darkness -- Scott Faris

The State Journal's March 3 editorial, "How to make Washington less divisive," was like someone showing me the path out of the dark and crippl…

Before issuing his order to end mask mandates, Texas Gov. Greg Abbott must not have looked at the recent numbers of coronavirus deaths in Texa…