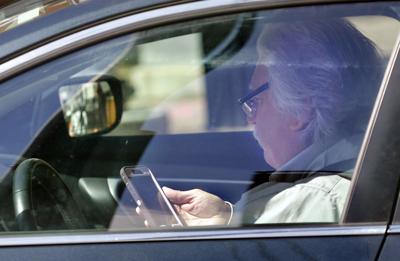 Now a worthy proposal by Rep. John Spiros, R-Marshfield, would similarly discourage adult drivers from distracting themselves with wireless devices.

The new restriction won’t be easy to enforce, nor will it magically stop every driver from handling their cellphones when they should be watching the road. But it will serve as a deterrent, encouraging more people to comply. That’s what happened after the state required motorists to wear seat belts: More people put them on, and today nearly 90 percent of all drivers in Wisconsin use the life-saving straps.

The “hands-free” driving bill that Spiros began circulating for cosponsors Tuesday at the statehouse in Madison is similar to a Minnesota law championed by Tom Goeltz, who lives in Hudson, about 250 miles northwest of Madison in St. Croix County. Goeltz lost his pregnant daughter three years ago when a driver believed to be distracted by his phone crashed into his daughter’s car in Stillwater, Minnesota.

Wisconsin lawmakers could force drivers to put down their phones

If passed, the law would be a considerable step up from the state's current ban on texting while driving.

“We need to get this done because it’s going to save some lives here in Wisconsin,” Goeltz told The Associated Press. “We’ll never know who they are, but we’ll see it in the statistics at the end of the year.”

Twelve of the 15 states with hands-free laws experienced a decline in fatalities within two years of passage, the AP reported. And in six states, the fatalities dropped by more than 20%.

Our State Journal editorial board endorsed legislation prohibiting mostly teen drivers from using cellphones in 2012. At the same time, we encouraged motorists of all ages to pay better attention to the road. Our editorial board also endorsed a ban on texting, which became law.

The allure of cellphones has only grown since then, with streaming video, games, and myriad apps. That provides plenty of reason for the Legislature to revisit and strengthen state rules.

Spiros’ bill would prohibit all drivers from holding their cellphones to talk or type, except in emergencies. And the only thing drivers with regular licenses could do with their phones is touch them once for hands-free use. So a driver, for example, could still use a mapping app for directions. But beginning drivers with probationary licenses or instructional permits would still be forbidden from using even hands-free functions.

The maximum penalty would be $50 for a first offense, $100 for a second offense, and $150 for third or subsequent violations.

Cellphones have become so ubiquitous and diverting that further limits on drivers make good sense.

Epic has been a stalwart leader in the business community. It should use this opportunity to set an industry standard for protecting the health and safety of employees, customers and the community.

Stick with mask mandate for now

We would be remiss if we did not give Roys credit for coming up with what we see as the most comprehensive agenda for addressing the issues that the Legislature will deal with in 2021 and beyond.

Editorial: Democrats should pledge to bring the 2024 convention to Milwaukee (and Madison)

The DNC can and should renew its commitment to Wisconsin by announcing next week that the 2024 convention will be held in Milwaukee.

Madison native has strong priorities, wants to pull people together

OUR ENDORSEMENT: Tyrone Cratic Williams shines in Democratic primary, wants to change police from within

The contest to replace state Sen. Fred Risser has attracted an impressive crew of candidates. As next Tuesday’s primary approaches, we will note some of the vital ideas these candidates have advanced for renewing democracy in Wisconsin.

Editorial: Democrats should nominate Jessica King in the 6th District

Only one of the three contenders for the Democratic nomination in the 6th has a chance to unseat Grothman. That’s former state Sen. Jessica King, a lawyer with deep roots in the district’s farm country and a record as a member of the Oshkosh City Council and the state Senate.