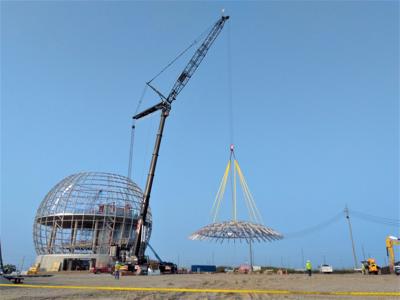 If it sounds too good to be true, it probably is.

Wisconsin learned that lesson the hard way with its Foxconn flop.

Instead of “the eighth wonder of the world,” as former President Donald Trump dubiously dubbed Foxconn’s plans for Racine County, the plant is a shell of what the company and its cheerleading politicians promised only a few years ago.

It’s not even clear what the Taiwanese-based multinational corporation will make at its facility in Mount Pleasant, about 100 miles southeast of Madison. First it was going to manufacture giant flat-screen televisions. Then it was going to be a research hub. Then it was supposed to make smaller screens. Now Foxconn says it has produced masks during the pandemic, and will concentrate on building data servers. Or maybe electric cars. Or maybe not.

Foxconn pledged to invest $100 million in UW-Madison for an engineering building and research. Less than 1% of that support has materialized. It planned to have 5,200 full-time jobs by the end of last year. Instead, the state is verifying whether it has 600.

Building up is better than out

So it’s reassuring to see Gov. Tony Evers and the Wisconsin Economic Development Corp. force the renegotiation of Foxconn’s contract to reflect reality and better protect taxpayers. Foxconn was underperforming long before the pandemic hit.

Under the new contract announced this week, Foxconn will get far less in state incentives for its unclear mission and slow progress.

Former Gov. Scott Walker’s original splurge would have allowed $3 billion in state subsidies for 13,000 jobs and $10 billion in private capital investment over 15 years. That would have left state taxpayers on the hook for $230,000 per job, an unprecedented government handout.

The new contract offers $80 million in tax credits if Foxconn creates 1,454 jobs and invests $672 million in capital. That’s about $55,000 per job if all of Foxconn’s targets are met. And the state can recover incentive money if Foxconn defaults.

That’s still a lot of taxpayer support, but only one-fourth of the original deal per job and closer to other economic development agreements Wisconsin has negotiated in the past.

We still hope Foxconn does well in Wisconsin. And we’re glad it signed the downsized contract. We don’t fault Foxconn or any business for trying to get government assistance. But we do fault our government, under Walker’s tenure, for offering such an enormous giveaway. What happened to respecting the market economy?

The one good thing about the original contract Walker signed is that most of its subsidies hinged on performance. So the $3 billion never left state coffers (in pa rt because the Evers administration didn’t let it). But the state has still spent more than $200 million in road improvements and other incentives for little reward.

Rather than trying to outbid other states with sweetheart deals to lure giant corporations to Wisconsin, a better strategy to growing the economy is to invest in education, research and startups that are already here. At the same time, Wisconsin must encourage an entrepreneurial spirit, prioritize technology — including rural broadband — and attract innovative people with its natural beauty, lower cost of living and higher quality of live.

Root for Foxconn to succeed. But beware in the future when a politician or private company offers taxpayers grandiose promises for a pipeline to the public treasury.

Progressive push to add as many as five

'You are being evasive': Questioning of FBI director gets contentious

'You are being evasive': Questioning of FBI director gets contentious

Biden arrives in Geneva ahead of Putin showdown

Biden arrives in Geneva ahead of Putin showdown