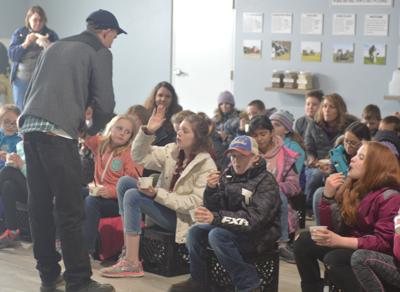 Every charter school in Wisconsin is a public school.

The many Democrats running for governor should memorize this fact, because some of them are getting it wrong.

Charter schools should not be confused with voucher schools, which are mostly private religious schools that receive public money for lower-income students to attend.

The two are very different.

“We need to stop privatization because that money comes right off the top and it’s only what’s left over after the charters have gotten their money that goes to our public schools,” Roys told WORT-FM (89.9) in Madison. “That’s wrong.”

As Politifact Wisconsin noted in an analysis of her interview last week, all charter schools in Wisconsin are public schools.

Milfred and Hands riff on the campaign songs of the 10 candidates for Wisconsin governor seeking the Democratic nomination.

Of 234 charter schools in Wisconsin, the vast majority — 211 — are operated within public school districts. Only 23 are “independent” charters, meaning they have the freedom to do what they want, outside the control of local school boards.

But even those are public schools. And they are authorized by public entities, such as the city of Milwaukee or UW-Milwaukee. Nonprofits run these few schools under contract and must meet performance targets to continue to operate.

Evers should be credited, not criticized, for collecting $95 million in federal money for public charter schools last year to encourage innovation and improvement in public schools.

Roys objects to the small number of public charter schools that are allowed to operate independently of local school boards. But innovation sometimes requires the ability to try new things outside the bounds of the status quo.

Evers’ position makes the most sense — and brings in more federal money — for the cause of public education in Wisconsin.

OUR VIEW: His cooperative and transparent approach to spurring greater innovation in urban school districts is encouraging

The Nuestro Mundo charter school in Madison, for example, has helped hundreds of children — some native Spanish speakers, others English speakers with no Spanish skills — become fluent in both languages. And now the school’s “dual language immersion” model has expanded to other Madison public schools.

Moreover, some of the federal money Evers’ DPI is distributing to charter schools this year will help economically disadvantaged students get off to strong starts at One City Senior Preschool, a charter started by Kaleem Caire, former CEO of the Urban League of Greater Madison.

Democrats who hope to become governor this fall should embrace the cause of public charter schools, rather than pretending they privatize education.

OUR VIEW: Credit new charter schools for going after the summer slide

'I shouldn't have been there': Accused Capitol rioter apologizes