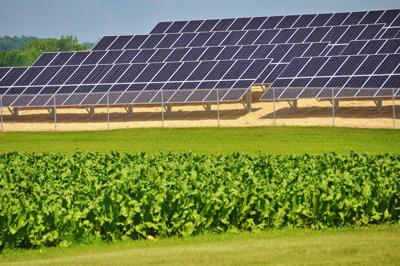 Two figures highlight just how far Wisconsin has to go to address climate change in a substantial way.

The first is 40%. That’s how much of our nation’s electricity the Biden administration hopes America can generate from solar power by 2035.

The second is 0.8%. That’s how much of Wisconsin’s electricity our state is producing from solar energy today, according to the U.S. Energy Information Administration (EIA). Wisconsin’s solar power production is well below the national average, which is about 4%.

So we’ve got lot of ground to cover — literally, with solar panels. (Some can be mounted on roofs, too.)

We need more sunlight collectors across farm fields, on businesses and private homes. We also need fewer people objecting to clean energy because they don’t like to see arrays of solar panels near their homes or communities. They’re essentially saying, “Not in my backyard,” a common and unconvincing complaint often abbreviated as “NIMBY.”

Compare a solar farm to any other kind of power plant — coal, natural gas or nuclear — and the benefits are clear, especially for neighbors. Solar farms don’t spew pollution into the air or foul our waterways. They don’t create radioactive waste.

The proposed solar farm west of Cambridge, about 20 miles southeast of Madison, is a prime example of the opportunity solar offers, despite some loud yet limited opposition.

The Koshkonong Solar Center plans to erect sun panels on 2,400 acres west of the village on the Dane and Jefferson county lines. It will create enough electricity to power 80,000 homes — about a quarter of the households in Dane County. The exciting proposal also includes enough lithium-ion batteries to store energy until it is needed. So if the sun isn’t shining, the Koshkonong Solar Center will still have power to distribute.

Esthetic concerns for rural landscapes are worth considering. Wisconsin is rich in natural beauty that improves our quality of life and attracts tourists.

But we’ll still have vast open spaces and forests to explore even if Koshkonong and every other solar proposal being considered is approved. More important, addressing climate change will help protect that beauty — and our communities and economies — from longer droughts, deeper floods and more extreme natural disasters.

July was the hottest month on record for our planet, according to the National Oceanic and Atmospheric Administration. And the last seven Julys have been the seven hottest on record, the agency reported. That’s similar to broader trends over time, with 2020 being the second-hottest year ever measured.

The burning of fossil fuels has spewed greenhouse gases into the atmosphere at an excessive rate for most of the last two centuries. The gases trap heat, contributing to higher global temperatures and more dangerous and costly storms. In Wisconsin, communities including Madison have been hit by unprecedented rain and floods.

The cost of solar energy is falling fast, with more utilities and homeowners embracing the technology. In fact, Wisconsin’s utility-scale electricity generation from solar more than doubled in just the last year, according to the EIA. The Two Creeks solar farm in Manitowoc County powered up last November, and the Point Beach solar farm plugged in last month.

When all of the solar projects coming online are included, Wisconsin’s solar generation increases to around 1.5% of Wisconsin’s total generating capacity, according to Renew Wisconsin. And the Koshkonong Solar Center, once built, will easily bump that above 2%.

So Wisconsin is making progress. Government incentives for more solar will help keep the momentum going. So will setting a price on carbon emissions. That way, the free market will transition faster to cleaner alternatives. Wisconsin still gets nearly 40% of its electricity from coal, which spews heat-trapping pollution into the atmosphere. Solar power will be cheaper and healthier for ratepayers.

Farm fields are pretty for neighboring homeowners. But if those farmers want to grow energy instead of crops on some of their land — as many farmers do near Cambridge and elsewhere — that’s their right, as long as they follow land-use laws.

Moreover, solar panels aren’t forever. They eventually wear out. And then the farmland underneath them will still be available to grow food if needed. The soil may even be better for crops, having enjoyed a break from tilling and planting. Because of no fertilizers or pesticides, it would qualify as organic. The land around solar panels can aid wildlife, including pollinators.

Wisconsin doesn’t have a shortage of farmland. In fact, the federal government still pays some farmers not to plant crops on their land.

So let the sun shine bright on more solar farms — in Cambridge and elsewhere across our state.

John M. Crisp: We call them 'woolly' mammoths for a reason

Ben Lamm and George Church are thinking big. Their new bioscience and genetics startup is called Colossal, and Colossal’s first project is mam…

Dane County supervisors should do as they say, not as GOP lawmakers do

STATE JOURNAL VIEW: The Dane County Board should resist the temptation to gerrymander