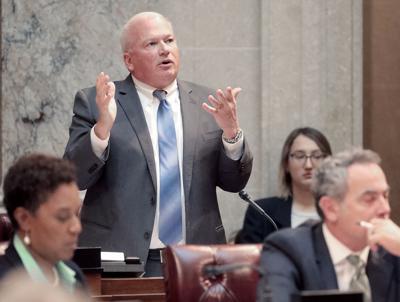 Other lawmakers want to spend $10 million on water quality.

Both ideas appear to be popular.

But before state leaders approve more tax breaks or spend money that isn’t in the state budget, they should ask a simple question: Can Wisconsin afford it?

The report, which is prepared the same way businesses put together financial summaries for shareholders, showed the state had a budget deficit of $773 million at the end of its last fiscal year on June 30, 2019.

This hidden deficit demands attention because it shows the state could be vulnerable if today’s strong economy turns toward recession.

By law, Wisconsin’s budget must be balanced. But state leaders use “cash accounting” to build their spending plan. Cash accounting is like balancing your checkbook without accounting for credit card purchases you didn’t pay off. It’s a narrower view of state finances that doesn’t factor in all future commitments.

Under cash accounting, Fitzgerald and others can claim the state has extra money to play with. But GAAP accounting unmasks budget tricks and future obligations that wipe away the supposed surplus.

Former Gov. Scott Walker pledged to move the state to GAAP accounting. And in 2012, Republicans who run the state Assembly — led by four members who were certified public accountants — approved a joint resolution with bipartisan support that would have required GAAP accounting.

Fast forward to today, and Gov. Tony Evers has said GAAP is “something to work toward.” The Legislature should respond by reviving its push for more transparent and broader accounting rules.

“Temporarily, it’s really good news,” said Dale Knapp, director of Forward Analytics, the research arm of the Wisconsin Counties Association. “But it is only temporary.”

Knapp said Thursday that higher spending and tax reductions in the latest state budget will send the GAAP deficit back toward $1.25 billion “and probably higher.”

That means the Legislature, as it wraps up its work this spring, should scrutinize calls for tax cuts and new spending that isn’t in the state budget. As the state’s annual report using GAAP accounting shows, the state’s financial position isn’t nearly as solid as it should be.

John Nygren is right: The state should sock away extra money for rainy day

OUR VIEW: Wisconsin has little to fall back on, should take fiscally responsible path

JUNEAU — It’s always been my belief that you know what to do with your money better than the government does. That’s why I’ve always been prou…

Gabriel Matzneff is not a good man, but it’s taken France a long time to realize it.

Census must lead to fair voting maps in Wisconsin

OUR VIEW: Bipartisan bill modeled after Iowa is best way to end gerrymandering