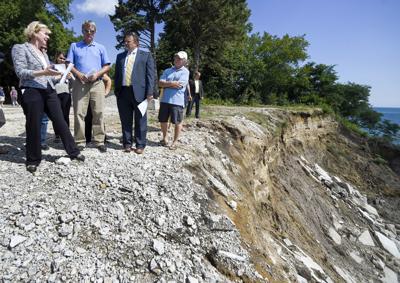 So we’re happy to see another member of Wisconsin’s congressional delegation joining the Climate Solutions Caucus, and just in time for Earth Day, which marks its 50th anniversary today.

To depoliticize the climate challenge and build consensus toward solutions, the Climate Solutions Caucus welcomes pairs of lawmakers — one Republican and one Democrat — to join together. So Baldwin and fellow Democratic Sen. Debbie Stabenow of Michigan joined in February with two Republicans: Sens. Marco Rubio of Florida and Susan Collins of Maine.

“The longer we wait to act, the more costly climate change will be,” Baldwin said.

“Changes in our climate, such as the rise of sea levels, are measurable facts,” he said. “Many communities in Florida are already dealing with the consequences.”

America needs broad and sustained action to cut carbon emissions, which trap heat in the atmosphere and warm the planet. One of the best and fastest ways to encourage clean energy alternatives is for the federal government to put a price on burning fossil fuels.

A carbon tax that doesn’t hurt average Americans is gaining support across the political spectrum. Revenue from the tax could be sent to the public in rebate checks, similar to the economic stimulus payments going to most U.S. adults now because of the coronavirus shutdown. Proponents say ordinary people would get more money back from a carbon tax than they would pay into it.

The Alliance for Market Solutions, which includes business executives, supports a carbon tax in exchange for less government regulation to encourage innovation.

One easy priority for the Climate Solutions Caucus should be to embrace greater investment in scientific research. America should be leading the search for clean energy breakthroughs, not waiting for other nations to discover the future.

Approving smart legislation will require support from both political parties. Baldwin, Gallagher and Kind are trying hard to make that happen. The rest of Wisconsin’s congressional delegation should be, too.

New York Daily News: Wanna be a dictator? Who might take over North Korea from Kim Jong Un

In these dark days for many mom-and-pop shops, it is with heavy hearts the world learns that the current proprietor of North Korea may be grav…

out of its self-inflicted hellhole is brazen

The work in meat-processing plants is, by all accounts, dirty, dangerous and grueling. The long shifts require quick, repetitive motions that …

Nick Hylla: The new normal can be better than the old one

Whatever the new normal is, it is still possible it will better than the old one.

Don Waller: Study the North Woods before logging it

Wisconsinites hunkered down during the COVID-19 pandemic are starting to return to beloved summer cabins and favorite North Woods campsites. Y…

California, again, is leading the nation’s fight against climate change. The California Air Resources Board adopted a rule Thursday requiring …

Pittsburgh Post-Gazette: Republicans should get back to being green in commonsense way

The election of Joe Biden as the 46th president of the United States came as a massive relief to climate activists around the world, myself in…

The world must confront rapid warming head-on, with America restoring its leadership

Elizabeth Kolbert: Driving across Iceland to visit my carbon emissions

I went to visit some of my carbon emissions last year.