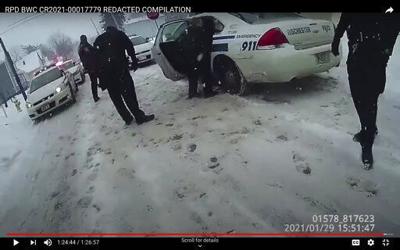 Madison’s top cop is setting strong priorities and the right tone during his first month on the job.

That includes his endorsement of putting cameras on patrol officers. The Madison City Council should drop its stubborn resistance to this helpful technology, which builds public trust by showing what really happens when a police encounter goes awry.

We also like Barnes’ emphasis on using more and better data to improve policing. He’s appropriately focused on reducing violent crime. His calm and thoughtful personality should help him engage with community groups.

Barnes’ ideas for further diversifying the force are creative. He wants to recruit in churches, for example, and encourage waiters and waitresses to consider law enforcement careers because of their customer service skills.

A former public school teacher who earned a doctorate in leadership studies, Barnes began his law enforcement career in Greensboro, North Carolina, where he rose to captain. He’s also been a hostage negotiator, a deputy chief in a smaller city, and director of training and professional development for Chicago’s police oversight group.

Greensboro is a similarly sized city to Madison and one of the first in the country to adopt body cameras. Greensboro did so before the devices became popular — and essential — in the wake of controversial police shootings of unarmed black men, such as the 2014 killing of Michael Brown in Ferguson, Missouri. Brown’s family called for “every police officer working the streets in this country“ to wear a uniform camera. One of Barnes’ predecessors — former Chief Noble Wray, who like Barnes is Black — worked for the Obama administration and calls body cams “a no-brainer” for Madison.

The cameras and software for storing video can be expensive, Barnes acknowledged. But they are worth the investment because they help hold officers accountable for their actions, or exonerate officers who haven’t done anything wrong. Cameras serve as neutral and dispassionate observers that get to the truth.

Wisconsin should be the next state to legalize marijuana

“Communities want body-worn cameras because ... they want to know what happened,” Barnes said. “And I believe they deserve to know as soon as possible — whether good or bad.”

The Legislature last year defined how and when police video must be released to the public, with reasonable exceptions for privacy. That should streamline the process for storing files and responding to open records requests.

Barnes likes the idea of testing body cameras in Madison soon, though he would prefer they be randomly assigned across the city, rather than being issued in one police district only, as some City Council advocates have proposed.

Either way is fine. What’s important is that Madison finally embrace this technology. Peer cities and about two-thirds of all law enforcement agencies in Wisconsin benefit from body cameras. Madison should insist on greater transparency, too.

Richard Wagner: How to make Madison more humane and resilient

“Only a crisis produces real change. When that crisis occurs, the actions that are taken depend on the ideas that are lying around.” — Milton …

A headline in the Washington Post put it this way: “Policing is not really on trial in Minnesota. That’s too bad.” Too bad? To the contrary, t…

See the moon from the perspective of Apollo 13 astronauts

See the moon from the perspective of Apollo 13 astronauts