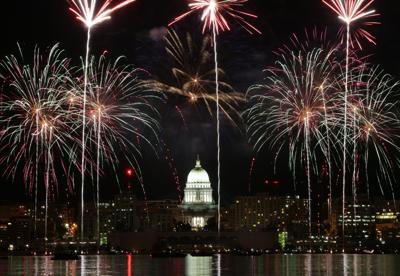 We’ve got something to say in today’s newspaper, and so do lots of our readers.

So let’s engage. Let’s speak our minds. Let’s exercise our free speech rights on this, the 243rd birthday of our nation.

Let’s also be sure to listen to what others have to say.

That’s how democracy works, or at least is supposed to work. It’s how our nation, state and local communities strive to make good decisions, often through compromise. A diversity of opinions and information is offered, dissected and debated — sometimes for months or even years. Ideas compete for support from the general public and elected officials. Then the best or most workable policies should advance.

This police officer most definitely belongs in Madison's schools

That’s what happened in Madison this week, with the City Council voting 15-4 to keep police officers in Madison’s four main high schools. The contentious issue pitted lots of parents, teachers and students who appreciate the public safety and mentoring the officers provide, against a group called Freedom Inc., which wanted the officers removed because most arrests and citations affect black students.

Freedom Inc. chanted and shut down one School Board meeting and disrupted others to try to get its way. But the loudest voices didn’t win, which was reassuring. Respecting free speech means allowing everyone to have a say, not talking or yelling over those you disagree with so that their competing views can’t be heard.

On this week's "Center Stage" political podcast, Milfred and Hands "ooh" and "aah" at the fireworks erupting during final debate over the state budget, with Gov. Tony Evers signing -- and partially vetoing -- the state's two-year spending document this week. Assembly Speaker Robin Vos, R-Rochester, and state Sen. Tim Carpenter, D-Milwaukee, trade insults and joust over state policy and spending, with Milfred and Hands providing smart commentary from the sensible center of Wisconsin politics.

We’re happy that Freedom Inc., with its social justice mission, spoke up so passionately on this issue. And in today’s newspaper, we’re publishing a letter to the editor from a reader critical of a recent State Journal news article about the group. We give preference to publishing views that differ from our own.

But speaking and listening must go hand in hand. And the School Board went to great lengths to listen, even taking public comments in a closed room away from the protesters so all citizens could be heard.

In the end, supporters of cops in schools, including our editorial board, prevailed but didn’t get everything we wanted. The contract to keep the officers includes language allowing the School Board to pull one cop from one school in 2020 or later — if the district specifies a year in advance which school would be affected.

That was a compromise, something our nation needs more of in this era of hyper-partisan politics and social media bubbles.

We’re all Americans, with rights and responsibilities. Let’s exercise both.

Jonah Goldberg: Nike fans the flames of the culture war

Nike is doing it wrong.