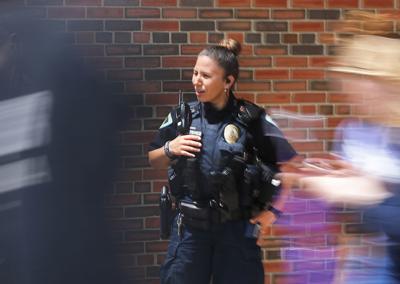 But the cops never really left, even though they are no longer stationed there, according to a log of emergency calls to East High this fall.

Madison police have responded 63 times since the start of school to East and its surrounding area between 8 a.m. and 4 p.m. That’s about once a day, on average.

It includes more than 15 officers rushing to calls for help from school officials last Monday at East. The officers used pepper spray to break up a melee of fights outside East at lunchtime amid a crowd of students, some parents and a man with a baseball bat. The scary violence convinced more than a third of the student body to stay home the following day, disrupting learning.

This police officer most definitely belongs in Madison's schools

Before that, more than 10 officers responded to a massive brawl Oct. 20 outside East. Other police calls to East from Sept. 1 through Nov. 5 have included reports of battery, disturbances, threats, sex assault and hit and runs.

The level of violence seems unprecedented, and it should change our community conversation about public education.

The question, it turns out, isn’t whether police should be at Madison’s high schools. They still go there almost every day. The real question is: Which kind of police officers does Madison want in its schools?

Do we want officers who don’t know and haven’t developed relationships with students — officers who have to rush to emergencies at the high schools from other parts of the city after conflicts have spun out of control? That’s what we have now, and it isn’t working well.

Or do we want officers who choose to work with young people, who walk the halls and school grounds throughout the day, who serve as role models and build trust so they can stem disputes before they escalate?

We strongly prefer the latter. Those kinds of cops are called school resource officers (SROs). Most of them, like Madison’s student body, were people of color when Madison still had an SRO program. Some came from difficult backgrounds, which helped them related to teens in trouble.

Never accept the epidemic of gunplay

The SRO at East used to be Zulma Franco. She was a Columbian immigrant who didn’t speak English and became pregnant at 13 before dropping out of school as a teen mother at 14. Yet she earned a GED diploma, became a Madison police officer and was stationed at East two years ago, helping to keep it safe.

“Even though (students) may have preconceived notions about what a police officer is, I have changed that,” Zulma Franco told our editorial board in 2018. “They see me as their officer.”

(Read her story at go.madison.com/Zulma).

Those are the kinds of SROs the district should bring back to Madison’s high school if this unacceptable level of violence continues. They never should have left.

Granted, our community is still getting past a deadly pandemic that kept most Madison students out of school buildings for more than a year. They had to learn online, which didn’t work well, especially for disadvantaged kids. Isolation and stress have disrupted many lives, even now that most students are back in classes.

The district has long championed restorative justice — carefully structured discussions between students to ease tension and settle disputes. Those efforts are important and must continue.

In the absence of SROs, the local school district has assigned aides to handle security issues. And school officials dissect every instance in which police are called to examine “what could have been done proactively to avoid involving law enforcement.”

Don't let the loudmouths scare away school board candidates

Yet the experiment of pulling police officers out of school buildings hasn’t worked, at least at East it hasn’t. (The State Journal is seeking data on the number of behavioral incidents at all of the district’s high schools this semester.)

The district should bring back dedicated officers, such as Franco, while exploring other ways to improve safety. That’s what Alexandria, Virginia, did last month, reversing its decision to remove cops from schools after frightening incidents involving students and guns this fall, the Washington Post reported. In Rochester, New York, the teachers union is demanding SROs return with additional school safety personnel.

Maybe the answer is a combination of people. In Milwaukee, the Running Rebels work as mentors with students in trouble while organizing outside resources. In Charlottesville, Virginia, unarmed and trained adults serve as “safety coaches.”

The challenge isn’t Madison’s alone. The nation has experienced an increase in gunplay as the pandemic has dragged on. Evidence also suggests a jump in violence in schools, according to Education Week.

Teaching about racism is critical; banning 'critical race theory' is not

SROs won’t solve all of the behavioral problems at our schools, but they will help. That’s especially true if, God forbid, a police officer trained to carry a firearm is needed to confront a school shooter. School shootings, though rare, have returned to pre-pandemic levels. They are on pace to be higher this year than in 2019 or 2018.

The strength of cities depends on their public schools, and startling violence doesn’t help attract or keep families. Madison is one of the fastest growing cities in the state. Yet its school enrollment, used to calculate how much state aid it receives, is down more than 400 students this year, about 2%.

With or without a pandemic, East and other high schools need a better learning environment. School officials should rethink their hasty dismissal of SROs last year. These officers are precisely the kind of police we want in our schools to improve safety.

What's the solution to rising violence at East High in Madison and other schools? Send your view, 200 words or less, to wsjopine@madison.com. Please include your address and phone number for verification purposes. We'll publish a selection of responses in next Sunday's newspaper and on Madison.com.

In a newly released interview, former President Donald Trump was asked about the Jan. 6 Capitol rioters who threatened to kill Vice President …

Biden's secretary of state is abandoning allies who can't get out

The leadership is lacking. The Madison School Board is failing to meet its obligation to provide a safe educational environment in our high schools.

California isn't surprise by her struggling performance as vice president

As I began my morning reading, I had to do a double-take at the Politico headline near the bottom of the home page: “He’s nuts and he’s got a …

Toronto Star: Glasgow was a bust, so let’s resolve to do better on climate

Its shortcomings should encourage Canada, other countries to redouble their efforts

The one gift you must get your family for the holidays

STATE JOURNAL VIEW: It's not a PlayStation, AirPods or fruit basket that should top your list