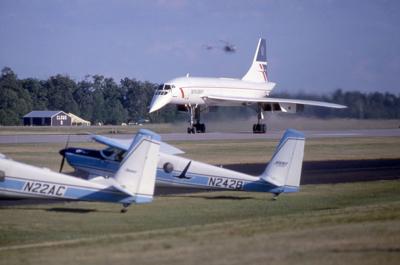 Much of modern life has improved since the 1970s. Not so air travel: Getting from New York to London takes roughly as long now as it did in the days of disco. Could that be about to change?

Nearly 20 years after the Concorde made its final touchdown, supersonic flight is once again becoming a tantalizing possibility. A handful of enterprising companies are now manufacturing next-generation jets that can exceed the speed of sound and dramatically reduce flight times. Warren Buffett’s NetJets just ordered 20 of them from the startup Aerion, at about $120 million apiece. UBS reckons the total market for supersonics could reach $340 billion by 2040.

These jets differ from their predecessors in key respects. Improvements in aircraft design, materials science and engine systems ensure that they’ll be lighter, quieter, more efficient and less polluting. Clever engineering is helping to reduce or eliminate the impact of the “sonic booms” that they create. Abundant private investment means they should be free of the government meddling that bedeviled the Concorde. Not incidentally: They look awesome.

If the business takes off, the benefits could be profound. Supersonics could connect major cities as never before, vastly extend global business networks, boost American competitiveness, and enliven an industry that has been stagnating for decades. They’ll likely cater to corporate clients at first, but the benefits should eventually spread as the pressures of competition and innovation take hold — just as they did for cars, cellphones and countless other technologies now taken for granted. Down the road, ultrafast travel for the masses isn’t implausible.

Unfortunately, there are impediments to the supersonic dream.

One is concern about noise. This led the Federal Aviation Administration to prohibit supersonic flight over land in the U.S. in 1973, and the ban is still in place. It makes the economic case for supersonic jets much weaker: It limits the market size, prevents companies from engaging in trial-and-error to find the most profitable routes, and eliminates the vast majority of potential business travel. The FAA should replace the ban with a targeted noise standard. A threshold of, say, 90 decibels — or about the same noise level as a lawnmower or motorcycle — would protect those living beneath flight paths while still allowing supersonics to flourish.

A second issue is atmospheric pollution. Many of the worries raised about supersonic travel — such as risks to the ozone layer — pose less of a threat than once thought. Others, including increased carbon emissions, could be mitigated by technology. Boom Technology Inc., for example, plans to fuel its supersonic jets using direct-air carbon capture, which would make flights carbon neutral. Other companies are working on variable-cycle engines that could significantly boost fuel efficiency. Even so, environmentalists are raising the alarm about supersonics — and could well keep them grounded, just as the Anti-Concorde Project once did.

Although the FAA is clearly rethinking things, — in January, it relaxed rules for supersonic test flights — it needs to move faster to ensure that American companies take the lead in this promising new field. In addition to replacing its misguided ban on supersonic flights over land, it should address environmental objections by collecting and publishing impact data from the jets’ test flights, and ensuring that all the new supersonic companies comply with international rules for offsetting carbon emissions.

Concerns about such a powerful technology shouldn’t be dismissed. But with the right rules in place, the age of supersonic travel is nothing to fear. It should be welcomed with open arms — and open skies.

Winter trying to make a comeback