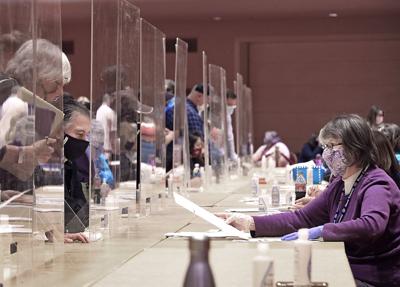 Of all the voting-related proposals being floated at the statehouse, one measure absolutely must pass.

The Legislature should allow local election workers to process absentee ballots the day before an election. That way, piles of early ballots — either mailed in, dropped off or filled out in person before Election Day — won’t delay the results.

Late tallies in recent elections have needlessly caused distrust of Wisconsin’s election system. That was especially true last fall, when more than half of Wisconsin voters, 1.9 million, cast absentee ballots during the pandemic, in large part to avoid catching COVID-19.

Remember the “ballot dumps” in the early morning hours of Nov. 4? That wasn’t fraud or anything suspicious, as then-President Donald Trump and others on the losing end of the vote falsely alleged. It was local clerks and their staffs diligently and professionally finishing their preliminary counts. It took a lot longer than necessary because local election officials weren’t allowed to process the unprecedented volume of absentee ballots in advance. Wisconsin is one of only a handful of states that forbids poll workers from getting a head start.

The presidential results in Wisconsin were aggressively challenged and irresponsibly bashed for weeks, with the late tally of absentee ballots in Milwaukee a bogus yet prime target.

How to make Congress less divisive

Allowing clerks to process early ballots the day before future elections would go a long way toward dispelling similar falsehoods and doubt. And the idea has strong bipartisan support.

Top Democrats such as Gov. Tony Evers and Milwaukee Mayor Tom Barrett favor the fix. So do prominent Republicans, including Senate Majority Leader Devin LeMahieu. Even our conspiratorial U.S. Sen. Ron Johnson, R-Oshkosh, appears on board.

Yet the path through the Legislature has been slow and uncertain, with a bill failing to become law last legislative session.

Critics worry that processing absentee ballots a day early might lead to “whisper campaigns” about who is ahead. They fear that might influence voters.

One last time: The election was fair. Our deep dive into thousands of complaints confirmed that again

But the bill guards against that: Election officials could only process the ballots by removing them from envelops and feeding them into machines. They would not be allowed to tabulate who was ahead or won until after the polls close on Election Day. In fact, “anyone who acts in a manner that would give them the ability to know or provide information about the vote totals” could face a criminal penalty.

The public could watch the ballots being processed. Additionally, “tamper-evident security seals in a double-lock location” would protect machines and votes. Feeding ballots into machines a day early would be optional for local municipalities, and the Elections Commission would have to approve any request to do so.

The governor included the measure in his budget, but non-fiscal policy doesn’t belong in the state’s spending plan. So advancing it on its merits through the Legislature is a better path.

Sen. Rob Stafsholt, R-New Richmond, has included the proposal in Senate Bill 214 with some related provisions. A public hearing is expected soon, which is encouraging. But if SB 214 bogs down, the most important part of the bill — early processing of ballots — should be split out and stand on its own to help ensure passage.

Wisconsin’s election system has withstood unprecedented scrutiny over the last year, yet public trust has eroded. Eliminating this extra task for local clerks — on top of everything else they do on Election Day — is a simple yet significant way to smooth and improve our democracy.

Wisconsin voters often split evenly on big elections and key issues. But voters on the right and the left agree on the dire shortcomings of th…

Leonard Pitts: Times these days when you simply must close your mind

Thirty years ago, when I was still a music critic, I received a letter from a lady who informed me in no uncertain terms that I didn’t know wh…

In his speech to Congress, President Joe Biden declared his ambitions for a country on its way back from the COVID-19 pandemic. “Now, after ju…

In a Cold War episode reminiscent of Boris and Natasha, the dictator of Belarus, Alexander Lukashenko, hijacked an international airline fligh…

The great Mark Twain once said, “What is the difference between a taxidermist and a tax collector? The taxidermist takes only your skin.”

Milwaukee needs another big win — this time for mayor

STATE JOURNAL VIEW: It's the city's best opportunity since the Bucks won the NBA title