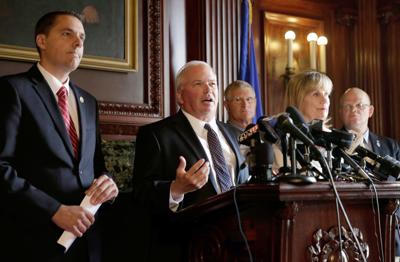 Below-freezing temperatures, with lows in the single digits, are predicted for early this week across Wisconsin.

That means thousands of homeless people, many of them single mothers with children, will need help getting out of the frigid cold.

The Republican-run Senate refused last week to discuss or vote on Assembly Bill 119, which would have provided $500,000 more annually to homeless shelters. The bill is one of eight popular and bipartisan proposals approved by the GOP-led Assembly.

AB 119 has earned unanimous votes of approval from key committees in the Assembly and the Senate. Yet Fitzgerald and other Republican senators — even one of the bill’s sponsors, Sen. Alberta Darling, R-River Hills — voted against a Democratic attempt to force consideration during the Senate’s final floor session of the year last Tuesday. The bill clearly has enough votes to pass.

So what is the hold up? Fitzgerald won’t say. All of the homeless bills, which would spend $7.5 million over two years, now appear stalled until at least spring.

The bills were written largely by Republicans and originated under former GOP Gov. Scott Walker’s administration. So petty partisanship shouldn’t be an issue. Moreover, the $7.5 million to defray housing costs, help struggling people find housing, create more shelter beds, pay for training and repair low-cost housing still represents a modest expense, compared to what surrounding states commit to the cause.

Fitzgerald and his Republican colleagues also ignored Gov. Tony Evers’ call for sensible safeguards on gun purchases last week. Evers ordered a special session to consider adopting consistent background checks on guns — including those sold at gun shows and online, which are now exempt. The vast majority of the public wants universal background checks so criminals have a harder time getting guns.

But Fitzgerald cowardly called the session to order with no other lawmakers in the room Thursday evening, adjourning the session a few seconds later to avoid debate or a vote.

To bottom out the state Senate’s weak week of dysfunction, the Republican majority fired Evers’ designated agriculture secretary, Brad Pfaff. Some GOP senators — including Howard Marklein of Spring Green, and Kathy Bernier of Chippewa Falls — voted against Pfaff’s confirmation even though they had supported his nomination in committee.

Fitzgerald was miffed in July when Pfaff criticized the Legislature’s budget committee for failing to release funds for mental health assistance to farmers. Pfaff’s confirmation process — and those of other Evers’ appointees — have now been stalled for nearly a year.

The Senate needs to do its job, listen more to the public, and stop obsessing over perceived political slights.

Hands on Wisconsin: It's beginning to look a lot like ... Halloween.

Snowstorms this week have turned Wisconsin into a winter wonderland.

Hands on Wisconsin: Trick-or-treater dresses up as Trump

It's Halloween and we know some people will be dressing up as the 45th president of the United States.

Hands on Wisconsin: It's the great Trumpkin

Mendota Marsh: It's getting cold in here

Oscar Fox and Lewis Crane prepare for winter in this week's Mendota Marsh.

Senate Republicans in Wisconsin are acting like Scrooge -- Mary Maronek

The Republican-run state Senate is giving a Christmas present to people who are homeless in our state. It consists of a stocking filled with n…