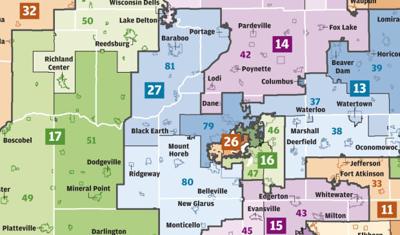 Make that six Republican lawmakers who now support the good-government bill to end gerrymandering in Wisconsin.

Congratulations and thank you to Reps. Loren Oldenburg of Viroqua, Jeff Mursau of Crivitz, and Joel Kitchens of Sturgeon Bay for adding their names to Assembly Bill 303. They join Reps. Todd Novak, R-Dodgeville, Travis Tranel, R-Cuba City, and all Democratic lawmakers in cosponsoring this important legislation, which mirrors Iowa’s proven model for nonpartisan redistricting.

Another lawmaker, Rep. Joe Plumer, R-Lodi, has repeatedly told the State Journal he supports AB 303. Other Republicans have expressed openness to this fair process for redrawing legislative and congressional districts to reflect population changes.

Instead of the politicians shaping voting districts for political advantage following the census, AB 303 would assign this once-every-decade task to the nonpartisan Legislative Reference Bureau. That’s similar to Iowa’s process, where the two political parties have agreed for decades to let a nonpartisan state agency draw neutral maps.

Iowa saves its taxpayers millions of dollars in legal bills because the two political parties don’t fight over districts in court. Iowa’s maps also have produced more competitive elections, which hold incumbents of all stripes more accountable to voters. Iowa requires its districts to be compact and to follow municipal and county lines as much as possible, without consideration for political advantage.

Mursau asked his constituents in northeastern Wisconsin last fall what they thought about the issue in a legislative newsletter. He subsequently reported that 78% of respondents said the bill was a good idea, while only 6% thought it was bad (the rest were unsure).

“After reading the comments and responses from last week’s question and looking over the bill,” Mursau wrote, “I’ve decided to add myself as a co-sponsor.”

Good for him — and for all those supporting AB 303.

The response from Mursau’s constituents isn’t surprising, given that more than two-thirds of Wisconsin’s counties have passed resolutions opposing partisan gerrymandering. And nearly three-quarters of respondents to the statewide Marquette Law School poll have said they favor the Iowa plan.

Democratic Gov. Tony Evers in on board, and a bipartisan majority of the GOP-run Legislature is getting closer to reality. Please contact your elected officials. Tell them you want AB 303 to become law this session.

OUR VIEW: He wants to fight in court for partisan advantage, but Iowa's model is best

Tell your state lawmakers to pass AB 303, the Iowa model for nonpartisan redistricting. Go to go.madison.com/lawmakers or call 800-362-9472 during business hours.

Los Angeles Times: These are the hottest years in modern history, and we’re doing nothing about it

Despite Trump, the world must act with urgency to address hottest years on record

Fred Kessler: How to draw fair maps in Wisconsin

MILWAUKEE — As a Wisconsin legislator, I was one of the people who sued the state in 2011, arguing that maps drawn by my Republican colleagues…

Badly delayed census data, one-party rule are challenges that must be overcome

OUR VIEW: Former speaker should back the Iowa model to stop partisan gerrymandering

OUR VIEW: His gerrymandered maps are wasting millions of public dollars in court

Editorial: Counties where Trump and Walker won want to end gerrymandering, too

OUR VIEW: The push for fair voting districts that respect all voters is gaining momentum as U.S. Supreme Court takes up Wisconsin case

Which map wasn't drawn by politicians?

If seeing is believing, look for a moment at these maps of congressional districts in Wisconsin, Illinois and Iowa.

Wall Street Journal: The case of Bill Barr vs. Apple

Steve Chapman: Trump's love of the military is phony

Many women are acquainted with a certain type of boyfriend. He’s generous with gifts, meals and compliments. In public, he’s the picture of de…

Center Stage: Um, yeah. About those political predictions we made

On this week's podcast, Milfred and Hands experience some painful yet fun moments as they fact-check their cracked crystal ball from a year ago. Hands was right about impeachment and Foxconn, but totally blew it on Biden. Milfred tries to explain away his Beto debacle, but nailed Walker's pass.

Jonah Goldberg: Our nation is paying for Trump’s refusal to be presidential

I’ve long argued that Donald Trump’s presidency will end poorly because he’s a person of bad character. I still think that’s true, though I ve…

Eric Frydenlund: How to find truth in a world of disinformation

PRAIRIE DU CHIEN — For all the advertisements and television shows I’ve seen about my favorite travel destinations, I’ve found the best way to…

On this week's political podcast, Milfred and Hands analyze the governor's State of the State speech, comparing his aggressive strategy to curling.

Should Colonial Pipeline have paid the hackers?