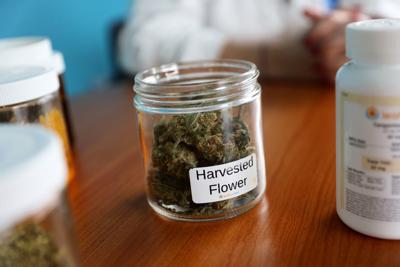 Thank goodness the state Department of Transportation is close to finishing its major expansion of Interstate I-39/90 from four to six lanes between Madison and Beloit.

Similarly, a dispensary is close to opening in Menominee, Michigan — just over the state line from Marinette and about 55 miles northeast of Green Bay. And it won’t be long, we suspect, until northwestern Wisconsin residents will be able to drive to the Twin Cities and Duluth in Minnesota to buy the drug legally there. Minnesota already allows cannabis for medical use.

So what is Wisconsin waiting for? Wisconsin would pull in an estimated $167 million a year in taxes from marijuana sales if the possession of small amounts were legalized here. Moreover, cannabis could help cancer and other patients with pain, and provide a regulated and quality product for those who use it for pleasure.

Wisconsin could save money, too, by not having to arrest, prosecute and in some cases incarcerate people for using a drug that an increasing number of states already allow.

In recent months, governors in New York, New Mexico and Virginia have signed laws legalizing marijuana. That means 17 states — some controlled by Republicans — and the District of Columbia now allow small amounts for recreational use. Twenty additional states allow cannabis as medicine, bringing to 36 states — nearly three-quarters — that are ahead of Wisconsin in providing Americans with more personal freedom. At the same time, these states are freeing their law enforcement and judicial systems from having to spend time dealing with minor drug offenses. They can address serious crime instead.

Center Stage: The politics of Aaron Rodgers vs. the Packers

Importantly, legalization spares many good citizens — a disproportionate number of whom are people of color — charges and citations for marijuana that make it harder to find a job.

Legal pot is popular in Wisconsin. A statewide Marquette Law School poll two years ago showed 83% of respondents favored legal cannabis with a doctor’s prescription. Only 12% were opposed. The same poll showed 59% supported legal marijuana for recreational use, while 36% were opposed. Now, with a popular dispensary in South Beloit, we suspect support has only grown.

Marijuana isn’t for teenagers. The Centers for Disease Control and Prevention has warned it can harm developing brains. But under Gov. Tony Evers’ proposal, only adults 21 years and older could purchase recreational marijuana. State residents could possess no more than 2 ounces and six plants for personal use, with tighter restrictions on nonresidents. Motorists would be forbidden from driving while high.

State surveys where pot is legal have not shown an increase in teen use. Nor have crimes or addiction surged. Marijuana arrests have fallen.

Legalization in Wisconsin would solve more problems than it would create. It also would recognize reality — one that the Republican-run Legislature can’t ignore: Countless Wisconsin adults already use small amounts of marijuana, and they easily get it just over the state line, where they pay user fees to other states — rather than to Wisconsin — before returning home.

The Legislature was right to remove non-fiscal policy from Gov. Evers’ state budget last week — items that had nothing to do with collecting or spending money. Those should advance on their merits as separate bills.

But GOP leaders were wrong to eliminate the governor’s reasonable proposal to legalize small amounts of pot. The nonpartisan Legislative Fiscal Bureau agrees that legalization is a fiscal matter because of the $167 million a year in revenue it could pull in, starting in 2022.

Enough delay. The Legislature should trust grownups to use this mild drug if they choose to do so. If anything, regulated cannabis poses less risk of harm than alcohol. It can comfort the sick, save the state money and reduce needless incarceration.

Tell us what you think in 200 or fewer words. We'll publish a selection of responses in next Sunday's newspaper and on Madison.com. Send your view to wsjopine@madison.com. Please include your address and phone number for verification proposes.

the hands of many renters who most need it

The International Olympic Committee should postpone this summer’s Tokyo Games or cancel them altogether.

In his address to Congress last month, President Biden used some variant of “compete” a dozen times.

Washington Post: A slaughter at a girls’ school may foretell Afghanistan’s future

Decision to withdraw from Afghanistan has brought rapid, ominous deterioration

Last Sunday's State Journal editorial, "167 million reasons for legal pot," is a good start for a rational discussion on legal adult use in ou…

I welcome last Sunday's State Journal editorial, "167 million reasons for legal pot," about the legalization of marijuana. But it may have und…

The state's backwardness on labeling marijuana a "gateway drug" is ridiculous. Marijuana is no longer feared the way it was in the "reefer mad…

Cynthia Tucker: Wind down the wretched and failed war on drugs

MOBILE, Ala. — In the first seconds of video of the events leading to the April 21 police shooting of Andrew Brown Jr., you see the unnecessar…

I appreciate last Sunday's letter to the editor "Legal marijuana would create jobs." It described the windfall of jobs that could come from th…

'Me and my sister were best friends'

'Me and my sister were best friends'

Who are the Cyber Ninjas?

Who are the Cyber Ninjas?