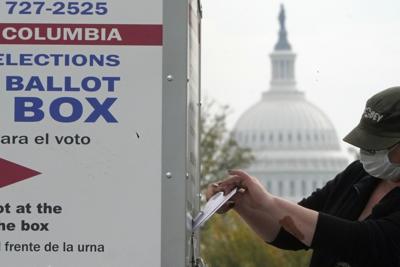 One week away from the 2020 presidential election, the United States finds itself in almost the opposite predicament from four years ago: Far from ignoring foreign interference, we’re in danger of imagining more of it than exists — and that in itself could cause big problems.

Adversaries from Russia to China to Iran are indeed assailing our democracy, a reality that should come as no surprise to anyone paying attention — but the good news is that this time, our government is paying attention. Influence operations on social media sites are getting caught before they can gain much ground. What the hack-and-leak experts have dreaded so far hasn’t happened. Even if investigators do find a link between the Kremlin and the dubious Hunter Biden laptop story published by the New York Post, the tale hasn’t caught on because cautious mainstream media organizations haven’t let it and many American voters have grown warier.

President Trump has refused even to acknowledge what happened last time around, yet that hasn’t stopped top security agencies from taking action. The Treasury Department has sanctioned multiple individuals who have attempted to meddle, including Ukrainian lawmaker Andriy Derkach for acting as a Russian agent to launder disinformation through U.S. sources discrediting former vice president Joe Biden. This step, in turn, empowered platforms such as Google and Facebook to kick the criminals off their sites. The State Department has revoked the visas of similar actors. U.S. Cyber Command and the National Security Agency are preemptively keeping malicious botnets off the Web to prevent ransomware attacks and other nefariousness on Nov. 3.

The Department of Homeland Security is coordinating with officials in all 50 states and Washington, D.C., to secure their infrastructure and spot intruders — which may have helped authorities spot the same sort of probes by Moscow into local computer networks they missed in 2016. Last week, DHS said a group sometimes known as Dragonfly or Berserk Bear was targeting these systems again. That’s concerning, but not because the hackers have changed or could change any vote tallies or registration information: The attackers’ intention, officials worry, may be to sow discord in the days after the election ends, perhaps by claiming they’ve achieved more than they actually have.

The spoofed emails purportedly from the far-right group the Proud Boys threatening voters, which according to the administration came courtesy of Iran, worked to this same end. The authors claimed they were “in possession of all your information” — but really, they were in possession only of what was already public or commercially available.

The United States, in short, faces two threats next week. One is genuine foreign interference. The other is the specter of foreign interference tricking us into distrusting our democracy at every turn — the so-called perception hack. Irregularities occur every election. They are bound to occur this election, too. Already, the president and his allies are alleging the untrustworthiness of mail-in ballots. We must guard against meddlers creating even more chaos, but we also must guard against being manipulated into creating it ourselves.

Ominous signals around race, the importance of competence, and a changing media foreshadowed our current Donald Trump-driven dysfunction. Barack Obama describes several of them in his autobiography, “A Promised Land.”

Plain Talk: Reince Priebus for governor — a nightmare for Wisconsin

"I woke up in a cold sweat the other night after dreaming that Assembly Speaker Robin Vos' college roommate had been elected governor."

The nationwide push to legalize marijuana state by state may make its passage seem like an inevitability to the public. But Americans are smar…

"Dale Kooyenga and Daniel Riemer deserve credit for advancing an innovative proposal for ranked-choice voting, and for opening a necessary discussion about democracy in Wisconsin. But they’re not going far enough."

Like the rest of his legislative Republican colleagues, state Sen. Patrick Testin spent most of the last year sitting at home, figuratively th…

"No one is advocating stripping governors of the power to declare emergencies. But by stacking emergencies and flouting the Legislature, Evers has forced our state to confront the possibility of a runaway, unaccountable executive."