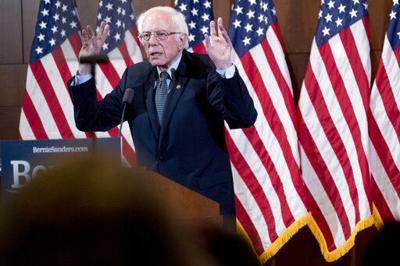 No shortage of mordant fun can be had at the expense of the Democratic National Committee and Iowa Democratic Party after the fiasco of the inaugural 2020 presidential contest, which has yet to yield definitive results apparently as a result of coding errors in a tabulation app created by party insiders. The college of cardinals at least lets the world know with white or black smoke how the vote for pope is going.

Yet the incompetence and hypocrisy will have real consequences. The first and most important could be a boost for Bernie Sanders, who may be able to claim the mantle of both victor and underdog at the same time. By all accounts the Vermont socialist performed well, with he and Pete Buttigieg leading based on partial results that the party finally released late Tuesday afternoon.

Yet many of Sanders’ supporters will believe the technological snafu denied their candidate a clear-cut victory. They believe the party establishment is trying to block their candidate, who until this campaign wasn’t officially a member of the party that botched the caucuses. Even if results do finally vindicate Sanders, those who underperformed (most significantly, Joe Biden based on Tuesday’s partial results) are already trying to dismiss their significance.

One irony is that while Sanders can capitalize on anger at the Democratic establishment, that very anger may have contributed to the mess. Sanders’ supporters cried foul after Hillary Clinton beat their candidate in 2016 and demanded rules to make the caucuses more “transparent.”

Unlike in previous years, Iowa caucus sites this year had to report two counts — a “first alignment,” which reflects how many people had each candidate as a first choice, and a “second alignment,” reflecting the results after supporters of candidates below the 15% threshold moved to their second choice. This may have made tallying more difficult and would have added complexity and muddied the result even if it weren’t for the technical failure.

This is a reminder that changing electoral systems to satisfy populist demands should be done with care, because the unintended consequences can further undermine their legitimacy. Democrats have been griping about how Iowa is insufficiently diverse to hold the first presidential contest, and this may be the last time the state goes first. But let’s hope whatever comes next is geared toward producing strong candidates and reliable outcomes and not merely satisfying the demands of partisan opportunists.

On that front, we wonder if any of the Democrats who feel as if they wasted months and hundreds of millions of dollars in Iowa are having second thoughts about calls to eliminate the Electoral College. As journalist Dan McLaughlin notes, such state-level failures highlight the perils of a nationwide system for popular vote counting. At least here the failure is contained, and let’s hope it can be rectified without calling the entire presidential nominating contest into question. ...

Senate should do its job, vote on Tony Evers' Cabinet picks

OUR VIEW: The Senate's petty politics are leaving state agencies and leaders in limbo

The delayed results in Iowa are a reminder of other potential features of the 2020 election that could create controversy and damage its legitimacy. Recall that in California in November 2018, several Republican Congressional candidates were well ahead based on the Election Day tallies, only to see the results reversed in the following days and in some cases more than a week later as absentee ballots trickled in.

We have argued that California’s lax election rules that allow “ballot harvesting” by party activists will also lead to political mischief. But even if they don’t, tallying delays discourage the swift acceptance of outcomes that well-functioning democracies need.

In 2018 the California rules seemed to hurt the GOP, but if the state’s March primary is closely contested, then Democratic candidates could feel the sting. Meantime, if Biden’s performance was as weak as partial results showed, then perhaps Michael Bloomberg, who sat out Iowa and is spending big elsewhere, becomes the party’s best bulwark against a socialist takeover. That’s unlikely to calm the passions of Sanders’ supporters or make the 2020 contest any less heated. Buckle up.

This is a very challenging time to be a golf instructor. None of my business plans involved a contingency for golf in the time of the novel co…

Dave Zweifel and John Nichols: Biden, Bernie and the need for a progressive turn

We believe that every vote for Sanders, no matter who the eventual nominee may be, is a vote for a more focused and effective Democratic message in November.

On Sunday, President Trump, absent any hard evidence, suggested that large numbers of masks were being stolen from New York hospitals, citing …

This is a very challenging time to be a golf instructor. None of my business plans involved a contingency for golf in the time of the novel co…

Paul Fanlund: In this crisis, there’s nothing ‘deranged’ about loathing Donald Trump

His response to the pandemic proves he’s every bit as cruel and uncaring as we always feared.

The battle to get ahead of the coronavirus curve is so serious, and so demanding, that the list of working-class heroes grows with each passing day.

Dr. Dipesh Navsaria: Love in the time of coronavirus

Public health messages that ask people to make a decision to change behavior in the name of protecting all members of our society sometimes don’t always go over well. But we're stepping up now.

Not only is this drastic amendment unwise, but it is completely unnecessary in Wisconsin.