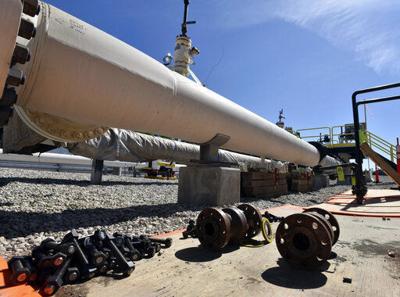 Ottawa last week formally invoked the dispute-resolution article of a 1977 treaty governing transit pipelines between the two nations. The treaty states that, except in an emergency, natural disaster or pressing safety concern, “no public authority in the territory of either” the U.S. or Canada may take measures “which are intended to, or which would have the effect of, impeding, diverting, redirecting or interfering with in any way the transmission of hydrocarbon in transit.”

Yet Whitmer is acting like she’s her own sovereign nation. She moved last year to revoke and terminate an easement that allows Line 5 to operate in a 4.5-mile stretch in the Straits of Mackinac and ordered Enbridge to shut down and “permanently decommission” the pipeline within 180 days. Enbridge has defied Whitmer and continued operations, saying her unilateral actions lack legal authority. The governor is seeking an injunction to close the pipeline.

If Whitmer prevails, she’ll disrupt a major energy supply chain that moves more than half a million barrels of oil and natural gas liquids a day throughout the Great Lakes region. In an amicus brief filed in federal court in May, Canada said residents of Quebec and Ontario rely on Line 5 to fuel their cars and heat their homes. The Toronto Pearson International Airport depends on it for jet fuel. Line 5 is a critical supplier for the Sarnia-Lambton Petrochemical and Refining Complex in Ontario, which employs more than 4,900 people.

If the pipeline shuts down, “up to 400,000 barrels per day of oil originating from western Canada (much of it destined for the United States)” would be stranded, the Canadian government said.

“The shutdown would cause massive revenue losses and potentially significant job losses in the energy sector in western Canada, just as it is struggling to recover from the impacts of COVID-19,” Canada warned. “Thus, the economic impacts of a shutdown would be immediate and severe both for fuel users in the east and for producers in the west.”

Whitmer said in a statement that she is “profoundly disappointed” in Canada’s invocation of the treaty. “Rather than taking steps to diversify energy supply and ensure resilience, Canada has channeled its efforts into defending an oil company with an abysmal environmental track record,” she said.

Never mind that the Pipeline and Hazardous Materials Safety Administration, the federal regulator responsible for overseeing the pipeline, said this year that it is “presently aware of no unsafe or hazardous conditions that would warrant shutdown of Line 5.”

Canada is seeking a bilateral negotiation. But if that fails, the dispute could end up in arbitration. In an email Thursday, a U.S. State Department spokesperson said “we expect that both the U.S. and Canada will engage constructively in those negotiations,” adding that “in addition to being one of our closest allies, Canada remains a key U.S. partner in energy trade as well as efforts to address climate change and protect the environment.”

If that’s more than diplomatic boilerplate, the U.S. will abide by its treaty and tell Gov. Whitmer to stand down. But Canada has learned the hard way from President Biden’s decision to kill the Keystone XL pipeline that, in this administration, hostility to fossil fuels trumps good neighborly relations.

Opinion: Rebecca Blank’s exit a huge loss — and poses an even bigger challenge

The departing chancellor is a bonafide A-lister. Finding another — given the relentless interference in UW-Madison by anti-intellectual Republicans in the Legislature — will likely be extremely difficult.

My union, the Wisconsin Laborers’ District Council, has been a fervent supporter of the Bipartisan Infrastructure Bill and its historic $1.2 t…