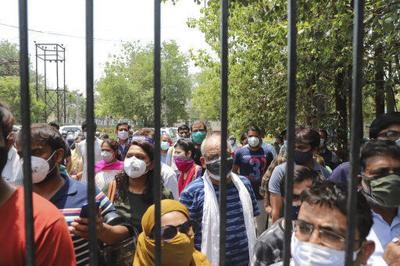 Coping with a virulent second wave of the virus, desperate Indians plead for oxygen tanks for their loved ones. Mass cremations of victims barely cope with more than 300,000 deaths daily, but less than 4% of nearly 1.4 billion people have gotten their first jab.

India has rightly become a tragic reminder that the United States and the developed world must do much more to help citizens of poorer nations get vaccinated. The urgency is not just humanitarian but also medical — to prevent new variants from spreading here.

So the surprise announcement Wednesday that the Biden administration will support waiving patent protections for coronavirus vaccines — a development cheered by many Democratic legislators and health activists — might seem to some like an appropriate response to the suffering in India. Proponents of this argue that many poorer countries will now be able to manufacture their own generic vaccines.

Sadly, the Indian case offers a very different lesson. Waiving patent protections for COVID-19 vaccines will do little in the short term to help Indians obtain mega-millions of doses. As for helping other countries, this hot-button issue distracts from what the United States must do ASAP to help get vaccines to the world.

Let me state up front that this is not a column about supporting or opposing Big Pharma. It is an effort to avoid the trap of assuming that if a patent waiver angers pharmaceutical companies that were aided with billions of U.S. taxpayer dollars, this automatically means it will aid poorer countries.

I’m looking past this symbolic gesture at the facts on the ground.

So back to the lessons from India.

“If the discussion is solely focused on waivers, it is the wrong one,” says Thomas Bollyky, director of the global health program at the Council on Foreign Relations.

The issue of whether to protect pharmaceutical companies’ intellectual property rights, says Bollyky, “has played a small role in what has happened in India. If we focus totally on it, we’re missing the lessons of what happened there.”

Indeed, India had access to vaccine knowledge. Three of the major vaccine developers, Johnson & Johnson, AstraZeneca and Novavax, had already signed voluntary licensing agreements last year with Indian manufacturers to share their technologies and know-how, as did the Russian manufacturers of the Sputnik V vaccine.

Already home to the world’s biggest vaccine manufacturers, including the Serum Institute of India (which can turn out 1.5 billion doses a year), India was set to become the world’s largest COVID-19 vaccine producer. It had promised hundreds of millions of doses to poorer countries, to be distributed by COVAX, a global initiative aimed at equitable access to COVID-19 vaccines. The Gates Foundation provided Indian manufacturers $300 million to scale up manufacturing.

Indian Prime Minister Narendra Modi boasted in January that his nation would save other countries, but he never organized a vaccine campaign for his own people. Instead, the nationalist-populist leader bragged that India had beaten the virus, while abandoning his COVID-19 task force, campaigning maskless at huge party rallies, and approving a Hindu festival with millions of worshippers packed together.

A second coronavirus wave soon exploded. India imposed an effective ban on vaccine exports, including to COVAX for lower-income countries.

Now the country most primed to export low-cost vaccines to the world is unable to ramp up sufficient supplies to vaccinate nearly 950 million people at home.

Hey, Alliant Energy Center: Thanks for all of those jabs and swabs

So what are the lessons from India for helping to vaccinate the world?

First, in the words of Indian American health activist Dinesh Thakur, writing in the online health journal Statnews: “There is no shortage of technology on offer or manufacturing capacity” within India. The problem in India was government mismanagement and lack of planning.

Second, the main global problem now is not patents but helping to build more regional manufacturing capacity for other countries to make vaccines, and overcoming the current shortage of raw materials.

“We need investment in the worldwide building of new production lines, which can take months or years,” I was told by Ezekiel Emanuel, vice provost for global initiatives at the University of Pennsylvania.

Emanuel also argues that “the [global] attention should go to voluntary licensing” of vaccine technology, because, unlike with forced patent waivers, such licensing includes the transfer of tech know-how and experienced manpower from the original makers. This know-how is vital because vaccine technology is a much more complex process than producing regular medicines.

(The White House could use the patent waiver threat, however, to nudge pharmaceutical companies toward more voluntary licensing or distribution of discounted vaccines.)

In the short term, the United States should start exporting its excess doses now to the neediest because the global need is so urgent, and we are sitting on increasing surplus.

Bollyky says, “We need a Global Operation Warp Speed” to set up global supply chains for vaccine manufacturing for now and any future pandemic.

There is no time to lose.