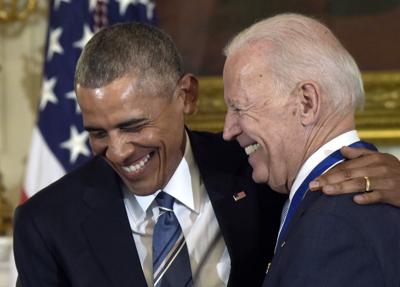 The Democratic convention case against President Trump boils down to COVID-19 and character, and the polls suggest it’s working. But the bigger issue next year will be reviving the economy from the shutdown recession, and on that score the Democrats are mostly quiet. Perhaps that’s because Joe Biden is promising to repeat the same policy mix that produced the slowest recovery in modern times during the Obama years. The record is worth examining.

Biden’s cheerleaders declare the Obama administration a smashing economic success. They say he inherited the deepest recession since the Great Depression, and handed President Trump the longest expansion on record. Obama did get some things right. He tolerated the shale energy revolution that emerged on his watch, albeit on private land. Only late in his term did he try to strangle it with pipeline bans and regulation. Despite conflicting instincts on trade policy, he also pushed for progress on major multilateral trade deals with Europe and around the Pacific.

But the overall economic numbers tell a negative story. Annual economic growth, adjusted for inflation, averaged 2.3% after the recession ended in June 2009 across Obama’s two terms. Despite the length of the post-2009 expansion, it was shallow.

5,000 reasons a month to give to the United Way

Sluggish growth went hand-in-hand with the worst labor recovery in generations. The unemployment rate peaked at 10% in October 2009 and didn’t reach the pre-recession level of 4.4% until March 2017. That painfully slow healing overstates the improvement since so many Americans dropped out of the workforce.

The labor participation rate — roughly, the percentage of working-age adults working or actively seeking work — fell to 62.8% when President Obama left office in January 2017 from a pre-recession 66.2% in January 2008 at the onset of the recession. The participation rate for men of prime working age (25-54) never rose much above 88% throughout Obama’s tenure, by far its lowest rate since records began in 1948.

Obama’s contribution was to make the Main Street recovery more difficult with mistakes the Biden Democrats seem set on repeating. Chief among these was the $800 billion “stimulus” spending bill in 2009 that was supposed to galvanize a rapid recovery. But the shovel-ready projects weren’t ready. Most of the money was spent on income and social-worker transfer payments that did nothing to change incentives to work and invest.

The payments also penalized work in the name of supporting laid-off workers. One signature policy was a significant extension of unemployment benefits, to 99 weeks, that paid people not to work long after the recession ended. Sound familiar? Measures ranging from expanded eligibility for food stamps to means-tested subsidies for mortgage borrowing punished people who worked more.

Casey Mulligan of the University of Chicago added up the various benefits and estimated the marginal tax rate created by the phase-out of benefits as workers earned more rose to 48% from 40% before the recession. Mulligan argues these labor-market distortions bear most of the responsibility for the depth and length of what he calls the “redistribution recession.”

Another lesson is how quickly the Obama Democrats pivoted from recovery to social revolution, and how destructive that pivot was. With the Affordable Care Act, Obama and Speaker Nancy Pelosi reorganized one-sixth of the economy. The law’s combination of tax hikes, regulatory diktats and the uncertainty attendant on “passing the law to learn what’s in it” hobbled the recovery.

Now Biden is promising to repeat this, but on a grander scale in health care and his version of a Green New Deal. The economic manifesto his policy team co-authored with staffers from the Bernie Sanders campaign promises to install 500 million solar panels in five years, eliminate carbon emissions from power plants, and replace every school bus with a green model. The document doesn’t explicitly ban fossil-fuel production but it promises new rules that will raise costs and curtail it.

Note that one political consequence of these policy failures was to lean more heavily on monetary policy to salvage a recovery from Obama’s bad instincts, and the Federal Reserve created distortions to do so.

By refusing to normalize monetary policy after the financial panic ended, the Ben Bernanke-Janet Yellen Fed inflated asset bubbles on stock exchanges, in corporate debt markets, urban property markets, and other parts of the world. These booms mainly benefited asset owners at the expense of wage earners and entrepreneurs. The result was a damaging form of inequality, new in America, that rewarded asset ownership or political connections instead of innovation and hard work.

Even with the Fed’s exertions, the economy slowed in 2015 and nearly fell into recession. Growth in the last six quarters of the Obama presidency averaged less than 1.9%. This helped Donald Trump make the case that the Obama expansion had left behind working people.

The Biden economic plan is best understood as Obamanomics pulled left by Bernie Sanders. He’d raise taxes by $3 trillion by his count — about $4 trillion by independent calculations. His spending plans run to at least $7.4 trillion, conservatively estimated. ... His labor proposals are the most pro-union since the 1935 Wagner Act. Regulations on health care, energy, transportation, technology and finance will multiply, often with a priority of reducing racial inequities rather than increasing opportunity.

The U.S. economy will have a growth spurt in 2021 as the pandemic ends no matter who wins the election. But over time these destructive policies will inevitably lead to slower growth. The Fed will be called to do even more, perhaps including bond purchases of private companies and modern monetary theory’s debt monetization. Asset holders will benefit more than wage earners.

This may not matter in the election, since Democrats and Donald Trump both want to make this a referendum on Donald Trump. But Voters should be under no illusions about what they’re buying in the Biden agenda, and under no fog of amnesia concerning what happened the last time.

'Very offensive': Mom of US Marine jailed in Russia reacts to Putin's comment

'Very offensive': Mom of US Marine jailed in Russia reacts to Putin's comment

CNN's Barbara Starr: No idea why the DOJ snuck into my life

CNN's Barbara Starr: No idea why the DOJ snuck into my life