The Miami Herald: According to racists, when white mobs beat cops and kill them, it’s a patriotic act. Just ask Trump
Share this 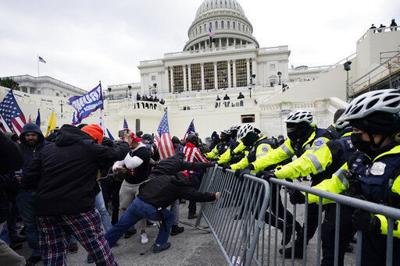 Do blue lives only matter when Black lives are perceived as the threat to them?

Up until last weekend, when videos began to receive wide circulation, we had heard more about that idiot Adam Johnson — a Floridian of course — accused of stealing Nancy Pelosi’s lectern than we did about the law enforcement officers whom a frenzied mob of white extremists were allowed to bash, beat, slur and kill during their rampage through the U.S. Capitol on Jan. 6. And, not so shockingly, some white police officers from across the country proudly stepped over that thin blue line and joined the lawless mobs.

We know why, and anyone who has been paying attention knows why, too.

Police officers are revered by many racist whites whenever equally racist rogues on the force bash, beat, slur and kill African Americans. But police themselves became the enemy last week, and the deafening silence over how — and by whom — they were battered is telling.

Never let it be forgotten that Brian Sicknick, a military veteran and member of the Capitol Police, was struck in the head with a fire extinguisher. The bloodied man was rushed to the hospital and placed on life support. He died the next day.

Never forget, either, Capitol Police Officer Howard Liebengood. He, too, put his life on the line during the assault on the Capitol. Days later, off duty, he took his life. How could the two events not be connected?

White terrorists beat another officer bloody with a pole bearing the American flag — no, seriously. It’s on video. Black officers were predictably called the n-word.

And never let it be forgotten that one of those Black officers, Eugene Goodman, who, by sheer guts alone took on a white mob, which gave chase as he lured them away from the entrance to the Senate chambers and into a group of police who withstood the assault. Innocent black man, angry white mob. It is a shamefully enduring American story, and Goodman is an American hero.

The law-and-order Trump administration’s only comment was to lower the White House flag to half-staff on Sunday. On Monday, first lady Melania Trump released a tone-deaf and self-serving statement on WhiteHouse.gov: “Most recently, my heart goes out to: Air Force Veteran, Ashli (Babbitt), Benjamin (Phillips), Kevin Greeson, (Roseanne) Boyland, and Capitol Police Officers, Brian Sicknick and Howard Liebengood. I pray for their families comfort and strength during this difficult time,” she said.

Notice to whom she gave priority, the traitors unleashed by her husband. She then lamented in her statement that she, too, was a victim — a target of “salacious gossip and unwarranted personal attacks.” Again, those blue lives, dead at the hands of whites, were almost an afterthought.

We live in a country where Blacks’ quest for justice is un-American, and white violence is as American as apple pie.

Plain Talk: The unmasking of the truly deplorable

"We saw lots of those deplorables this week as they stormed the nation's citadel of democracy, the U.S. Capitol, in an attempt to stage a coup that would keep the most deplorable of all, Donald Trump, in office for at least four more years."

John Kass: What's wrong with public schools? It's the unions