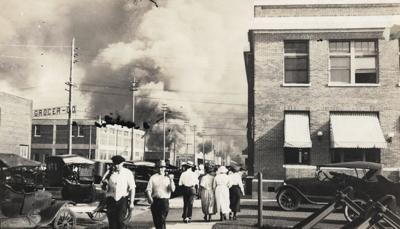 “We can’t just choose to learn what we want to know and not what we should know,” President Joe Biden said last week from Tulsa, Oklahoma, on the 100th anniversary of a targeted massacre of Black residents there by their white neighbors. Dozens of people were killed in the attacks, hundreds were hospitalized, and thousands were held hostage, some for days. More than 35 square blocks in the wealthy Black community were destroyed. Yet many Americans know little, if anything, about the events. They were never taught.

America has a shameful history on race. From building the country on the free labor of enslaved people kidnapped from Africa, to snatching land from Native Americans, the U.S. has long treated people of color as less than human. The remnants of earlier oppression continue to exist today, in subtler forms of institutional racism that still hold back African American people and other groups.

This sordid past makes many people uncomfortable. It’s something they’d rather not talk about. Even worse, some people want to act like it doesn’t exist at all in an erasure of history. We saw it for years regarding Tulsa, and we’re seeing it again now, in the backlash to New York Times journalist Nikole Hannah-Jones and her 1619 project series that looked at the legacy of slavery in America.

The project ran in the Times Magazine in August 2019. It was widely acclaimed and won the journalist a Pulitzer Prize for her introductory commentary. It also ignited a barrage of criticism from people on the right who couldn’t handle the truth, including former President Donald Trump, who called the effort to look at America’s history through a racial lens “toxic propaganda” and “ideological poison” that would “destroy our country.” School systems moved to ban its teaching in the classroom and, in the latest saga, Ms. Hannah-Jones was denied the prestigious Knight Foundation-endowed chair in race and investigative journalism with tenure at the University of North Carolina because certain conservatives disliked the project and a separate essay she wrote advocating for reparations. Instead, she was offered a five-year contract with the possibility of tenure later, unlike others who previously held the position.

The message is clear: Some only like their history whitewashed. Textbooks have long glossed over slavery or depicted the enslaved as happy and content. Some plantation tours don’t acknowledge slavery at all. Then there are those who deny the Holocaust and downplay the Japanese internment camps created during World War II.

The rewriting of history is nothing short of cowardly, and it’s allowed the vestiges of slavery to fester, resulting in inequities in housing, personal wealth, education, the judicial system and environmental issues that persist in America today. The rest of us must stand up to revisionists by pushing back against their false reality and demanding the truth regarding the country’s legacy. ... Two hundred people signed onto a letter in the publication The Root slamming Ms. Hannah-Jones’ tenure track denial, including Baltimore native and writer Ta-Nehisi Coates and filmmaker Ava DuVernay, and 150 historians. In a separate letter that ran in a full-page ad in the News & Observer newspaper, 1,619 University of North Carolina alumni also expressed outrage. “Dismissing a list of merits that includes winning a Pulitzer Prize, Peabody Award, and MacArthur ‘Genius’ Grant is an attempt to penalize Nikole Hannah-Jones for her groundbreaking and unvarnished reporting of American history,” the ad reads. “We demand that the Board of Trustees immediately revisit this matter, grant tenure as recommended by the appropriate faculty, Dean and Provost, and restore the integrity of our University.”

There’s no guarantee that there will be a new vote on Ms. Hannah-Jones tenure, and it’s unclear when the board may take up the issue, according to The News & Observer. But the public pressure has made it clear that history and truth still matter to many in this country. President Biden said it well last week: “We should know the good, the bad, everything. That’s what great nations do. They come to terms with their dark sides. And we’re a great nation. The only way to build a common ground is to truly repair and to rebuild.”

We can’t do that if we don’t acknowledge what’s broken.

Milfred and Hands highlight Liz Cheney's and Elise Stefanik's connections to Wisconsin and its political leaders, including Cheney's birth in …

Number of people killed by guns in US continues to rise