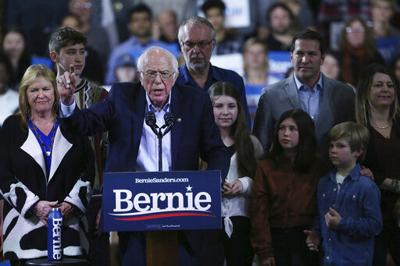 When Bernie Sanders was lying in a Las Vegas hospital after a heart attack last October, I was certain his campaign was dead. Health-wise, Sanders was already pushing his luck by bidding to become the oldest person to be elected president. Surely no voter would take a risk on a 78-year-old candidate with two stents in his heart.

Obviously, I was wrong.

In a “Death and Immortality” course I teach at Boston University, one of my main objectives is to convince my students that they are going to die. During World War I, Sigmund Freud scratched his head while watching young men march confidently off to war. Half of their battalions were fated to come back in body bags, but each was convinced that death was for the other guys. “In the unconscious,” Freud wrote, “every one of us is convinced of his own immortality.”

We are apparently equally convinced of the immortality of our beloved politicians: Humans die; Bernie is a human; but Bernie will never die.

As the prospects of the Democratic candidates have been rising and falling like the lines on an EKG, I’ve become obsessed with the actuarial odds of Sanders dying. I called Hal Tepfer, the director of BU’s master’s degree program in actuarial science, who pointed me to the Social Security Administration’s mortality tables. According to those tables, the chances of a man of 78 (Sanders’ age) dying within a year are 4.8%.

But what about over a presidential term? Sanders will be 79 on Inauguration Day, Jan. 20, 2021. His chances of dying during the following four years are 23%. They rise to 48% if you are hoping for a second Sanders term, and that’s not factoring in a history of heart attacks.

According to Tepfer, any reputable insurance company considering writing a life insurance policy is going to demand complete medical records. Sanders has been adamant that he will not provide such a history. That would immediately disqualify him for life insurance. But somehow Sanders’ Trumpish secrecy does not disqualify him as a front-runner for the Democratic presidential nomination.

All these calculations are for naught, of course, if Sanders is the god/man many of his devotees imagine him to be. However, at least according to a 2018 study of heart attack victims published in the Journal of the American Heart Association, Sanders is not likely to live forever. That study found that the median life expectancy for Americans who had a heart attack at 75 or older was just 3.1 years. Aaron Eisman, a M.D./Ph.D. student in biomedical informatics at Brown University, went through the findings with me: The chances of an average man of Sanders’ age dying in the year past the date of his heart attack (Oct. 1, 2019, in Sanders’ case) are roughly 1-in-4. The chances he would die over a four-year term of office are roughly 1-in-3.

But the nightmare scenario for “Never Trumpers,” including me, is the death (or incapacitation) of the Democratic presidential nominee between the Democratic National Convention, July 13-16 in Milwaukee, and Election Day on Nov. 3. What happens then? And what does our nation’s tweeter in chief do to muddy the waters and exploit the chaos?

The problem with Bernie Sanders goes beyond the 's' word

The odds of this scenario are, admittedly, low. Assuming Sanders gets the nomination and assuming he is like an average heart attack victim in the AHA Journal study, the odds of him dying between winning the nomination and Nov. 3 are slim, about a 1-in-40 chance. That is not a big chance but, given the stakes, it’s too big for me. (The Kentucky Derby winners in 2009 and 2019 went off at longer odds.)

Of course, Sanders is not the only Democratic candidate who has been angling to become a West Wing octogenarian. Biden is just one year younger (77), so according to the Social Security Administration’s mortality tables, he has a 4% to 5% chance of dying within a year. What distinguishes Sanders (and sharply increases his chance of death) is his heart attack history.

Behavioral psychologists tell us that human beings prefer not to think probabilistically. When confronted with 20:1 odds that a septuagenarian we love will die in the next year, we convince ourselves that our beloved is one of the 19. When confronted with the fact that our favorite presidential candidate has about a 1-in-4 chance of dying within a year of his heart attack, we vote for him anyway: Death is for other people.

I like Sanders. I would be delighted to have him as my president. But I do think probabilistically, and I simply don’t believe he is immortal. For those of us who are desperate to hear some modern-day Gerald Ford declare, “Our long national nightmare is over,” this primary season just isn’t a time to roll the dice.

Let Republicans take the risks. Let them tempt death by nominating — again — a 70-something man of dubious health who has refused to release his medical records. All sorts of glass ceilings could be broken in this presidential election year. Here’s to hoping that electing the oldest president ever is not among them.

Prothero is a Boston University religion professor and the author of the forthcoming book “Religion Matters: An Introduction to the World’s Religions”: prothero@bu.edu. He wrote this for the Los Angeles Times.

The nightmare scenario for “Never Trumpers,” including me, is the death (or incapacitation) of the Democratic presidential nominee between the Democratic National Convention, July 13-16 in Milwaukee, and Election Day on Nov. 3.

I spoke last month at Wisconsin Manufacturers and Commerce’s Made in Wisconsin Conference. We celebrated the accomplishments of manufacturers …

The fact is, there can be no gerrymandering in a statewide race. And when people foil the vote suppressors, as Wisconsin citizens did on Nov. 3, the real cheaters lose.

Jessie Opoien: Donald Trump has shown again and again that he just doesn’t care about COVID-19

First lady Melania Trump’s infamous jacket has supplied the de facto slogan for her husband’s administration. If he doesn’t act now to give Joe Biden the information his team needs to take over in January, the pandemic will claim even more lives.

Donald Trump is still refusing to accept the peaceful transfer of power.

There is plenty of credit to go around for this year’s Democratic win. But Brandon L. Yellowbird Stevens, the vice chair of the Oneida Nation, said, “It’s a safe assumption that we played a big part in that victory.”

John Nichols: Pocan did a lot more than Kasich to elect Biden

Pocan and progressive House members who represent big cities in the swing states joined grassroots labor and community groups in doing the heavy lifting. They succeeded, where Kasich failed.