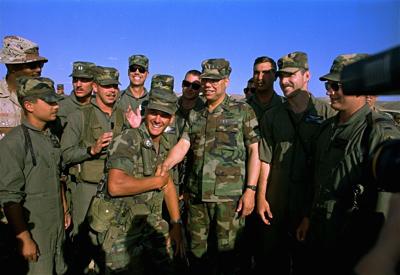 Much as Colin Powell deserves a tribute as America’s first Black secretary of state and chairman of the Joint Chiefs of Staff, he was under-recognized as a bridge-builder and champion of political moderation. Powell, who died Monday, was a Republican who dared to challenge his own party’s orthodoxy and tried to avert its drift toward right-wing extremism. The fact that he was later joined in his call for moderation by one of the architects of that rightward lurch — former Vice President Dick Cheney — attests to Powell’s judgment and thoughtful foresight.

Cheney was adamant about launching the 2003 war in Iraq and was willing to engage in the worst forms of political subterfuge to get his way. He enlisted Defense Secretary Donald Rumsfeld in a campaign to deceive Americans — and the world — into believing Iraqi dictator Saddam Hussein possessed weapons of mass destruction.

Powell’s was the loudest and most persistent voice of dissent in President George W. Bush’s administration, arguing that evidence was flimsy and didn’t justify going to war. Cheney and Rumsfeld ridiculed the retired four-star Army general and Vietnam veteran as weak. Their insistence on the Iraqi threat (nonexistent though it later proved to be) convinced Bush that an invasion was necessary. The result was a costly, deadly and highly unpopular war that destabilized the region and wound up drawing troops and resources away from America’s well-justified war in Afghanistan. Both wars ultimately would conclude in humiliating U.S. retreats.

Long before that, however, was Powell’s own humiliation. Bush, under heavy pressure from Cheney, ordered Powell to compile the most persuasive case he could for United Nations support for the Iraq invasion. Powell, an obedient soldier to the end who believed first and foremost in honoring the chain of command, gave a 76-minute Security Council speech aided by enlarged intelligence photos and visual aids purporting to prove that Iraq was developing chemical, biological and nuclear weapons.

Never accept the epidemic of gunplay

Across America, those who dared to question Cheney and Rumsfeld found themselves bombarded with right-wing attacks on their patriotism. Powell recognized that this dangerous trend screamed for correction before it got out of control. After resigning as secretary of state in 2005, he admitted the U.N. speech was a “blot” on his legacy. In 2008, Powell wanted to endorse his longtime friend, Republican Sen. John McCain, for the presidency. But he feared McCain’s choice of Alaska Gov. Sarah Palin as his running mate would pull the GOP even further to the right.

In the ultimate affirmation of Powell’s good judgment, he was joined recently in the call for GOP political moderation by none other than Cheney himself.

Powell was “simply and completely, a leader,” Secretary of State Antony Blinken stated Monday. “ … He gave us his decency.”

Leonard Pitts Jr.: In America, justice should not have to be a relief

The first feeling is relief.