San Francisco Chronicle: Kamala Harris runs out of money -- and moments
Share this 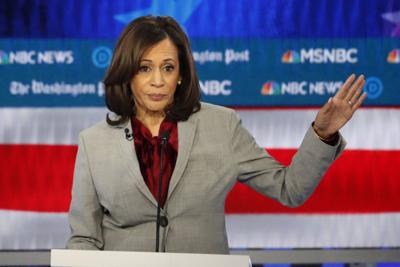 Kamala Harris’ presidential campaign, which began in a burst of possibility like none other in this election cycle, ended abruptly for the most prosaic of reasons. It “simply doesn’t have the financial resources we need to continue,” she announced Tuesday.

Of course, in American politics, money magnetizes to bandwagons, and the wheels of the Harris campaign have been spinning in place for many weeks.

This campaign had its moments, and none was more full of anticipation than her announcement rally that drew more than 20,000 on Martin Luther King Jr. Day in Oakland. She owned the moment of the first Democratic debate in June when she brazenly challenged former Vice President Joe Biden over his 1970s opposition to school busing as a means of forcing desegregation.

“I was that girl,” she pointedly noted about how desegregating Berkeley schools opened opportunity for her. Biden, the front-runner, was flummoxed.

But it did not last.

What went wrong for the candidate who had such electrifying early moments? As much as anything, the moments were not matched by articulation of a clear agenda or sustained rationale for her candidacy.

She initially embraced “Medicare for All” and the abolition of private health insurance — the Holy Grail for the Democrats’ progressive wing — then peeled back her support, citing her conversations with voters who wanted to keep their plans.

She seemed to struggle with whether to highlight her work as a prosecutor for San Francisco and the state of California, which included decisions that created discomfort on the left. She was caught flat-footed in a July debate when Rep. Tulsi Gabbard, D-Hawaii, launched into a factually dubious but withering attack on the California senator’s work as state attorney general.

In a November debate, Harris oddly trained her harshest lines against Gabbard instead of any of the four in the top tier.

If there was a path for Harris, it was toward the center, where South Bend, Ind., Mayor Pete Buttigieg and Sen. Amy Klobuchar gravitated — with some success — as doubts about 77-year-old Biden’s viability refused to fade. Sens. Elizabeth Warren and Bernie Sanders had locked up the left with their unalloyed progressivism.

As the ideological lines became drawn more vividly, Harris was stuck in a vacuum of vacillation. The infighting within her campaign, an issue from the start, eventually became the subject of national political stories all but certain to further chill any chance of fund-raising that would be critical to a revived surge.

Thus arises the question: Was it worth it?

Anyone who has followed the junior senator’s career from here San Francisco days knows she is studied, introspective and resilient. She will learn from this campaign. In many moments, it brought out her wit and a warmth with audiences that had formerly been a source of reluctance for a politician who guards her private life. She clearly has risen in national prominence, which will benefit her work on Capitol Hill — and her future prospects.

She is likely to be on the short list for running mate no matter which Democrat ends up with the nomination. She also could be in line to become the next U.S. attorney general, or a top leadership post if the Democrats were to regain control of the Senate.

Opportunity may yet come for Kamala Harris in 2020.

Jonah Goldberg: Nostalgia is the ace up Joe Biden’s sleeve

I like the word malarkey, consarn it. It’s the bee’s knees. Sure, the youngsters might say, “OK, Boomer” on hearing Joe Biden utter the word, …