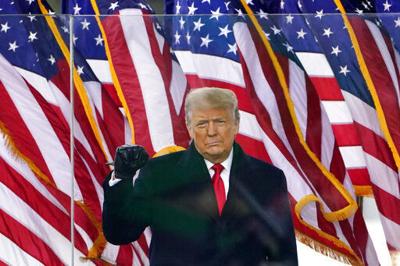 “This is ridiculous,” blared the subject line of the fresh email in my inbox Monday. “Will you join Trump’s new site? We’ve emailed you 13x. Fail to respond=Trump knows you’ve abandoned him.” I guess the cat’s out of the bag — I have, indeed, abandoned Trump.

The fundraising email, which had the audacity to say it was “humbly asking 1 final time” to join former President Donald Trump’s new website — the one that just scrubbed his own blog — wasn’t from Trump or even one of his kooky surrogates. This one was from the National Republican Congressional Committee.

The stated purpose of the NRCC is uncomplicated and straightforward: it is “devoted to increasing the number of Republicans in the U.S. House of Representatives.”

What does that have to do with joining a former president’s partly defunct vanity website? Back to that in a minute.

The NRCC email, which I indeed received multiple times, was hardly the first one like it. The National Republican Senatorial Committee, “solely devoted to strengthening the Republican Senate Majority and electing Republicans to the United States Senate,” also demanded I sign up for Trump’s new social media platform.

In fact, the NRCC and NRSC flooded my inbox in May with daily pleas and ultimatums, begging me to sign up for Trump’s new site. One claimed to be the “6th and final message.” Many of them warned, “You have 10 min to answer before we move on.”

Of course, they have not moved on. As I typed this, another email landed with a thud in my inbox.

The committees responsible for electing Republicans across the country are adopting the bizarrely aggressive, bordering-on-comical strategy that’s long been used by Trump and his surrogates to collect emails and raise money.

Throughout his presidency, leading up to his failed reelection efforts in 2020 and even after he was sent packing to Florida, Trump world sent weirdly harassing fundraising emails to his own supporters, demanding increasing pledges of loyalty — and dollars.

One scolding email from the Trump campaign in 2020 read, “I hate to be the one to tell you, but your Trump 100 Club offer has been RESCINDED.”

Another from Trump’s son Eric shamed its recipients: “You’ve received multiple emails from Team Trump, including my father, inviting you to join this brand new prestigious club, and you’ve ignored every single one of them.”

Others warned of a “list” Trump was keeping — “I want to know who stood with me when it mattered most,” one read, “so I’ve asked my team to send me a list of EVERY AMERICAN PATRIOT who donates to this email.”

Another signed by Vice President Mike Pence similarly threatened, “[Trump]’s requested a list of every Patriot who donates to this email in the NEXT HOUR. Will he see your name?”

The emails were so over-the-top, other malign actors tried to imitate them.

Democratic voters in Alaska and Florida received an email in 2020 with the following demand: “You will vote for Trump on Election Day or we will come after you. Change your party affiliation to Republican to let us know you received our message and will comply.”

At first the emails were believed to have been sent by the Proud Boys, a far-right white supremacist group, but eventually U.S. officials blamed the mailer on Iran. It’s not a great sign when one of the nation’s worst enemies assumes we’ll be duped by an email threatening the actual lives of voters.

Back to the NRCC and NRSC. The intimidation, shaming and harassing emails from Trump world indeed raised a ton of money for the president, but did not result in his reelection.

So it’s odd that the organizations charged with electing and reelecting Republicans to Congress are copying the failed strategy — not just in the tone of the emails, but tying them to Trump at all.

A former Republican congressional operative I spoke to was pointed: “What a load of bull. We lost the House because of our fealty to Trump, and the committee whose sole job is to try to win back the majority in Congress is pushing further allegiance to the guy who not only cost us Congress in the first place, but sent a mob to attack Congress on Jan. 6. Have they no shame?”

The emails are worse than ironic, they’re downright embarrassing. Begging and shaming people, presumably their own voters, to sign up for the website of the deplatformed loser who cost Republicans everything is a sign congressional Republicans have given up on attracting new voters.

Instead they clearly believe they can only win by getting every last existing Trump voter to continue to part with their money — and even they apparently require intimidation tactics.

“This is ridiculous.” I wholeheartedly agree.

"Amtrak believes that if it gets the funding, it can replicate that kind of passenger traffic in the Midwest and other parts of the country."

D.L. Hughley on 'How to Survive America'

D.L. Hughley on 'How to Survive America'

Blind chess champion's advice to all

Blind chess champion's advice to all