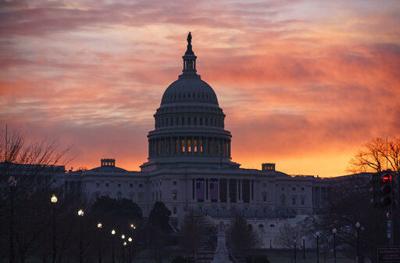 Among the many atrocities Donald Trump heaped on the United States in four short years — a grotesque child separation policy that’s orphaned more than 600 kids, an increase in white supremacist and anti-Semitic threats and attacks, an insurrection at the U.S. Capitol that left five dead — one is a little harder to measure, but just as ruinous.

Trump successfully convinced millions of Americans that America was not great before him, that “patriotism” simply meant serving his delusional whims, that democracy wasn’t real and worth protecting, and that America’s greatest institutions should be burned to the ground.

Those may just be ideas, but those ideas, as we saw on Jan. 6, have real and often deadly consequences.

That Trump managed to convince a not small number of people that all of this was “conservative” to boot, is another awful byproduct of his Shermanesque destruction of the party that so loyally enabled him.

In the wake of the riots that threatened the lives of the sitting U.S. vice president, U.S. lawmakers, Capitol police and Capitol staffers, many have labeled the lawless mob as “conservative” or have blamed conservatives for inciting them.

An article in The Atlantic said the riots were fueled by “white conservatives’ extremism.”

Another in The Guardian called it a “conservative Caucasian invasion.”

Many in the mob themselves believe what they were doing was in the name of conservatism, the movement their heroes on Fox News and right-wing radio have perverted to continue justifying Trump’s authoritarian power grabs.

But none of what happened on Jan. 6 was conservative.

Nothing is conservative about storming a federal building in an attempted coup to overthrow the lawfully elected government. Sedition is inherently unconservative, as it’s both unconstitutional and a crime — a total betrayal of a movement based on a near-absolute adherence to constitutionalism and the law.

Nothing is conservative about attacking police — in one abhorrent case, beating a police officer with an American flag pole. People who in one moment march in support of the police when they’re accused of racially motivated brutality, but attack them in the name of Trump, aren’t conservatives — they’re just racists.

Nothing is conservative about overturning free and fair elections in Pennsylvania, Georgia or Arizona, or baselessly insisting those elections were stolen. Conservatives favor states’ rights. And conservatives know that you don’t protect elections from actual fraud by falsely yelling “fraud” where it isn’t.

Conservatism, rightly understood and not misappropriated by a president who couldn’t spell it if he had to, is a set of principles espousing free enterprise, limited government, fiscal austerity, deregulation, a strong national defense, and free trade.

Social conservatism supports Judeo-Christian values, including a respect for life.

For all these reasons, plenty of actual conservatives denounced what happened at the Capitol.

The conservatives at The Dispatch wrote, “Today’s terrible events have made crystal clear what should long have been plainly understood — Trump is dangerous to the peace and security of the American nation.”

That publication’s editor in chief, Jonah Goldberg, tweeted: “Never gonna stop being annoyed by people who think being a ‘real’ conservative means being a lockstep supporter of anything the nominally Republican politician they like does or says.”

As actual conservative Sen. Ben Sasse put it: “Today, the United States Capitol — the world’s greatest symbol of self-government — was ransacked while the leader of the free world cowered behind his keyboard — tweeting against his vice president for fulfilling the duties of his oath to the Constitution.”

What happened on Jan. 6, and what’s been building for much of the past four years, can rightly be called right-wing. It’s certainly been enabled and fomented by Republicans. And it’s obviously very much the brainchild of Trump and his cronies.

But it isn’t conservative, and just because a president who doesn’t know better, Ivy-educated congressmen who definitely know better, and grifters in right-wing media want to cloak their odious, self-serving and un-American rhetoric in the guise of conservatism doesn’t mean they get to.

If we’re going to move on from this ugly chapter and help ensure it never happens again, it’s important to know what it is and what it isn’t.

So let’s be clear: The rioters who stormed the Capitol, who broke the law, violated the Constitution, and endangered the lives of Americans, and everyone who incited and protected them, didn’t do it in the name of conservatism. They did it in the name of Trump.

Plain Talk: Sedition from the Wisconsin statehouse to Capitol Hill

"If any of these so-called leaders had any principles at all, they'd resign and go home in shame."

"The report violates key tenets of social science research, including rigorous research design and faithful reporting of the full results of empirical analysis."