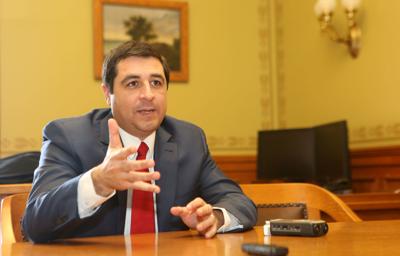 Candidates for state attorney general like to promise that, if elected, they will stand up for all legally defensible laws passed by the voters’ representatives, whether Republican or Democrat. This pledge is rooted in principle: an attorney general is the chief lawyer of the people, not a party, and so, like any lawyer, he ought to put the interests of his client first.

Yet recent practice suggests that whether a state’s top cop will enforce or abandon a particular law depends more on its partisan flavor.

Josh Kaul, the newly elected Democratic attorney general of Wisconsin, is no exception to this new trend. Leading up to last November’s election, his oft-stated position was clear: “The AG’s job is to defend state statutes and state agency actions if there is a legally defensible position to take.”

Now ensconced in office, Kaul has taken a new tack. In a closely followed labor case pending in the U.S. Supreme Court, Kaul quietly informed the justices recently that Wisconsin no longer objects to a lower-court ruling striking down a key part of its “right-to-work” law.

Adopted by 27 states, “right-to-work” laws free private employees not to pay a union that they do not wish to support. They do this mainly by forbidding unions from adding what are called “agency shop” provisions to their collective bargaining agreements. Those clauses say that every worker must pay union dues, even if they choose not to formally join the union.

But clever unions have found a way to collect dues from unwilling workers even if an agency shop provision is later invalidated. The strategy is to get workers to sign, on day one, a “dues checkoff” form, which enrolls the worker in a kind of auto-payment program. The employee thinks she’s agreeing to a convenient means of satisfying a recurring payment obligation to the union. But what she doesn’t realize is that not only is the checkoff automatically renewing and difficult to revoke, it also remains valid even if the “agency shop” clause is later dropped. So if the state enacts a “right-to-work” law the day after she signs the checkoff form, she remains on the hook for up to a year of forced dues payments.

Like other “right-to-work” statutes, Wisconsin’s law closed that loophole by giving employees a right to revoke a checkoff at any time. The employee in the Wisconsin case, while working at John Deere, tried to do just that. But the union refused to honor her decision, and litigation ensued.

Unsurprisingly, the state’s position from the very beginning was that the statute was lawful. The National Labor Relations Act explicitly permits state “right-to-work” laws, and courts around the country have upheld them. And while the union pointed to a 48-year-old unwritten order from the Supreme Court that seemed to favor its position, later cases had rendered that decision a dead letter, all but instructing lower courts to overlook it. Still, two judges held for the union, while a third wrote a powerful dissent explaining why Wisconsin’s statute was perfectly valid.

The case was ripe for Supreme Court review, and so the previous attorney general sought it. Yet a mere day before the court was to vote on the petition, Kaul pulled the plug.

This eleventh-hour desertion of Wisconsin’s “right-to-work” law contradicts Kaul’s campaign pledge. There is not just one “legally defensible” argument in support of Wisconsin’s law, there are several. The dissenting judge on the appeals court certainly thought so. In separate briefs, the National Federation of Independent Businesses and other public interest groups agreed. So did six other states, all of which urged the justices to correct the lower court’s error.

Worse, Kaul accomplished this about-face under cover of darkness. He issued no press release before or after. His filing did not explain why the law is suddenly indefensible. And even today, Kaul refuses to explain his decision.

Even more curious is the timing of Kaul’s move. The docket shows that the justices in recent weeks had twice rescheduled their discussion of the petition. As Supreme Court watchers know, that’s significant: It suggests that at least one member of the court had taken an interest in Wisconsin’s petition. Yet Kaul did not pull it until the day before the justices’ conference. It seems Kaul withdrew the petition only after he noticed the Supreme Court had shown interest in restoring Wisconsin’s statute — an interest that apparently he does not share, perhaps because his union benefactors (making up his eight biggest campaign contributors) don’t share it either.

Like so many attorneys general in other states, Kaul campaigned on a promise to stand up for state laws as a neutral agent. In a major first test of that promise, Kaul failed. He owes the people — his client — an explanation.

Jay Heck: The war on voting is doomed to fail

The Republican Party has lost its way

Dallas Morning News: What we can learn from the synagogue terror attack

We see everywhere the belittlement and dehumanization of others; we should stop

COVID has divided people. Some of us take the virus as a serious health risk. Others believe it is, at best, a federal overreaction to a mild …