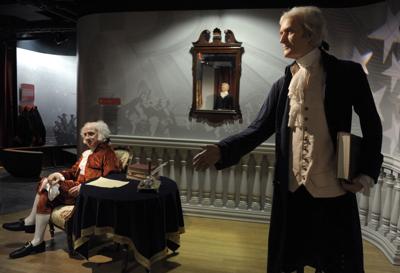 The Fourth of July has traditionally been a day of parades, fireworks and festivities. I will miss walking in the Whitewater and Milton parades because they are cancelled due to the coronavirus pandemic.

The history teacher in me, however, wants to remind everyone about the origins of Independence Day.

Independence from Great Britain gained momentum in the American colonies after the Revolutionary War broke out in April 1775 and Thomas Paine published “Common Sense” in early 1776.

During a June 7, 1776 meeting of the Continental Congress at the Pennsylvania State House, Virginia delegate Richard Henry Lee introduced a motion calling for independence from Great Britain.

After intense debate, delegates postponed a vote on the resolution and created a committee to draft a formal statement justifying the break from Great Britain. The five men appointed were future Presidents Thomas Jefferson of Virginia and John Adams of Massachusetts, as well as Roger Sherman of Connecticut, Robert R. Livingston of New York, and Benjamin Franklin of Pennsylvania.

While some uncertainty surrounds the drafting process because the committee did not leave any minutes or notes behind, it is widely assumed Jefferson wrote most of the first draft quickly by himself. The final draft was presented to Congress on June 28.

After voting to approve the Lee Resolution on July 2, Congress spent the next two days debating and revising the Declaration of Independence. Final passage took place on July 4, with 56 delegates from the 13 colonies signing the declaration.

Festivities began immediately after adoption of the declaration, including concerts, bonfires, parades and the firing of cannons and muskets. Philadelphia held the first official commemoration on July 4, 1777. Annual celebrations continued in cities throughout the country every Fourth of July. Independence Day was declared a federal holiday under President Ulysses S. Grant in 1870.

Two of the original signers in Adams and Jefferson, who became our second and third presidents, respectively, have a unique history. Once close allies and friends, these two men had a major falling out over political philosophies while serving under President George Washington. Both ran to succeed Washington for president in 1796, and Adams won in a very close contest.

Down but not out, Jefferson ran against Adams again four years later and was the first person to unseat a sitting president in 1800. This election, though just as bitter as the one four years earlier, was the first peaceful transfer of power from one political party to another in the United States.

The two mended fences in subsequent years, though rivalries remained the rest of their lives. Both died within hours of each other on the 50th anniversary of the first Independence Day. Jefferson passed first on July 4, 1826, at the age 83. That same day, John Adams lay on his deathbed, his last words being: “Thomas Jefferson still survives.” He was mistaken: Jefferson had died five hours earlier at Monticello.

It is almost poetic the Fourth of July so greatly connected these two Founding Fathers in life and death. Our fifth president, James Monroe, passed away five years later on July 4, 1831.

In a letter to his wife, Abigail, Adams said he hoped the signing of the Declaration of Independence would be celebrated by future generations: “It ought to be commemorated, as the Day of Deliverance by solemn Acts of Devotion to God Almighty. It ought to be solemnized with Pomp and Parade, with Shews, Games, Sports, Guns, Bells, Bonfires and Illuminations from one End of this Continent to the other from this Time forward forever more.”

And that is how we commemorate Independence Day today: Parades, shows, fireworks. Even though this year we will not be able to celebrate in our traditional fashion, Independence Day continues to unite us.

Because of people like Dr. Tim Harrington, there is hope in these troubled times.

Milwaukee Congresswoman Gwen Moore is hoping that she can get Congress to award an all Black Women's Army Corps unit known as the "Six Triple Eight" a Congressional Gold Medal for its overseas service during World War II.

For the sake of our society, be drawn neither left nor right. Be steadfast in service to the downtrodden as well as those with power.