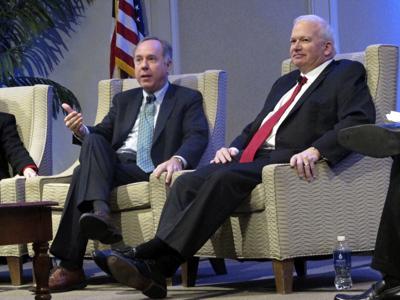 With regard to November elections, the term “October surprise” is so commonplace as to have become a bit clichéd: A revelation or accusation about a candidate in the final month before the election — whether unearthed by the candidate’s opponent or brought to light by journalists — that challenges the generally held viewpoint about that candidate.

There have been October surprises that, it can be credibly argued, have swung elections.

For that reason, we think early voting should be limited to four weeks before the election. Voters should avoid casting their ballots too early, lest an October surprise cause them to regret their selection.

As of last week, this view puts us at odds with the Republican majority in the state Legislature, which before sunrise on Wednesday passed, among other pieces of legislation, a bill limiting early voting to two weeks prior.

Based on the openly partisan nature of so much of the legislation in the lame-duck session, we feel it can be safely concluded that the Republicans’ decision to limit early voting is based on the presumption that early voting benefits Democrats, based on its popularity in reliably Democrat-leaning counties such as Dane and Milwaukee. This line of thinking from Republicans suggests that curtailing early voting will benefit their candidates, because “their” voters aren’t as interested in voting early.

Here’s the thing about that line of thinking: It isn’t supported by fact.

Charles Franklin, director of the Marquette University Law School poll, posted an enlightening graphic on Twitter on Dec. 1. It displayed data from the Wisconsin Elections Commission regarding absentee and early in-person voting by county.

In the top nine?

Milwaukee County. (Also in the top nine: Racine and Kenosha counties, which are Democrat-leaning east of Interstate 94 and solidly Republican west of it.)

In the top three?

Dane County, which rivals only Milwaukee for being reliably Democrat.

But Dane wasn’t No. 1 for voting early last month.

That honor goes to Ozaukee County, followed in second place by Waukesha County. Ozaukee, Dane and Waukesha all had more than 25 percent of their ballots cast early, with Ozaukee surpassing 30 percent.

Ozaukee and Waukesha are two of the three WOW counties (Washington is the other W in the acronym). The WOW counties are Republican strongholds. A GOP candidate for statewide office knows that he or she must have strong turnout in those counties.

So, as it turns out, some of the voters that Republicans consider “ours” like voting early even more than those in Dane and Milwaukee counties that the GOP would regard as belonging to the Democrats. “Their” voters.

We’re not surprised. No one, regardless of political leaning, likes to wait in a long line. Don’t we all perk up when another cash register opens up at the grocery store?

The voters you consider yours like early voting, too.

Plain Talk: Reince Priebus for governor — a nightmare for Wisconsin

"I woke up in a cold sweat the other night after dreaming that Assembly Speaker Robin Vos' college roommate had been elected governor."

The nationwide push to legalize marijuana state by state may make its passage seem like an inevitability to the public. But Americans are smar…

Racine Journal Times: UW-Madison censors one of its alumni

When a private business decides to no longer allow someone to comment on its website, that’s not censorship. We sometimes refer to the bleepin…

"Dale Kooyenga and Daniel Riemer deserve credit for advancing an innovative proposal for ranked-choice voting, and for opening a necessary discussion about democracy in Wisconsin. But they’re not going far enough."

Disney's 'Raya and the Last Dragon'

Disney's 'Raya and the Last Dragon'

Gusty winds and heavy snow hammer parts of the Northeast

Gusty winds and heavy snow hammer parts of the Northeast