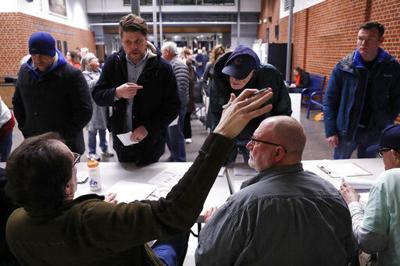 You know the wagons are circling when Iowa’s highest-profile Republicans stick up for the state’s Democratic Party.

In the aftermath of the state Democratic Party’s caucus disaster, the Republican trio, recognizing their party’s own stake in the future of the first-in-the-nation event, emphasized its virtues and shrugged off the notion that the delay in reporting the results was a big deal.

“Iowa’s bipartisan first-in-the-nation status helped lead to the nomination of President Obama and has the full backing of President Trump,” Grassley, Ernst and Reynolds said in a statement. “The process is not suffering because of a short delay in knowing the final results.”

But Iowa is suffering. The case for the caucuses holding their leadoff spot has been dealt a huge blow.

The caucuses already were the subject of the usual criticisms, and now we can add to the list this one: The 2020 caucuses failed Monday night to provide the kind of order to the presidential race that is one of their primary reasons for being.

Late Tuesday afternoon, the party finally began reporting results. As of this writing, 62% of results were in. But the damage had already piled up as the nation waited. On social media, #iowacaucusdisaster was trending. On the TV networks, it was a PR disaster.

So, will the caucuses survive?

The early chatter is they won’t.

David Plouffe, who ran Barack Obama’s 2008 campaign, much of which was centered on Iowa, said on Monday, “We may be witnessing the last Iowa caucus.”

David Yepsen, a former Des Moines Register reporter who has long been recognized as the dean of the state’s political press corps, tweeted this late Monday: “RIP caucuses. And after the GOP fiasco of 2012, Iowa probably shouldn’t even try.”

In the 2012 “GOP fiasco” he referred to, Mitt Romney was named the winner, only to have the Republican Party of Iowa reverse itself after an audit and declare Rick Santorum the victor.

Yet, Iowa survived that disaster.

Is it too early to definitively pull the sheet up over the caucuses?

Betting against Iowa generally has been a losing proposition. But this time, it feels different. The caucuses have too many enemies, especially in the Democratic Party. Many of them are in Iowa.

The complaints about disenfranchisement remain and grow louder. And it may be a longstanding criticism, but the argument that the state is too white resonates in a party where people of color are a vital part of putting together a winning coalition.

That’s especially true in the age of Trump.

It’s even more noticeable in a cycle in which candidates of color went by the wayside even before Monday night. (It’s not fair to blame that on Iowa; the party’s debate rules had an effect. So did the losing campaigns. But Iowa probably will shoulder some of the blame.)

The point is, the caucuses already have plenty stacked against them. Now the 2020 candidates have to wonder how much they’ll get out of Iowa even if the belated verdict is good for them.

Senate should do its job, vote on Tony Evers' Cabinet picks

OUR VIEW: The Senate's petty politics are leaving state agencies and leaders in limbo

With the State of the Union Tuesday night and the Senate impeachment vote Wednesday taking up space on the news menu — not to mention the New Hampshire primary is less than a week away — Iowa’s “bounce,” if it even exists, surely will be limited.

That said, we would be remiss if we did not praise the tens of thousands of Iowans who showed up to caucus Monday night. Early estimates are that turnout was one of the highest in history, even if it appears it will not measure up to some expectations.

The accurate reporting of the results, the verification process the Iowa Democratic Party is going through, matters to the participation of each and every one of them.Iowans showed their passion this campaign cycle, and they are to be commended for turning out in droves Monday night to take part in this unique part of democracy.

Monday’s caucuses, for better or worse, were the first event of the 2020 presidential nominating calendar.

This may end up being the state’s last time in the spotlight.

Dr. James Stein: How to manage COVID-19 risk as you leave your cocoon

Many people are experiencing intense but expected anxiety as they prepare to leave the shelter of their homes during the COVID-19 pandemic. As…

Our Black community is mentally and physically drained, we’re tired and we’re angry. Here are five points to consider.

Speed limits and seat belt requirements are good laws, even though they are a hassle and test our patience. Same is true with safer-at-home orders.

At a time when President Trump, and too many of the president’s allies, have practiced the politics of division at its worst, Barnes is encouraging people to act on behalf of economic, social and racial justice.

SEIU president Mary Kay Henry is optimistic the pandemic's lessons will cause working people to rise up and demand changes for the nation's economic future.

Plain Talk: Trump, not the USPS, is the joke

No one has been more threatening to the postal service's future than Trump, who, in the middle of the coronavirus pandemic that's costing it billions, refuses to give the service federal help as it has for everything from airlines to railroads.

Paul Fanlund: Cap Times Idea Fest 2020 will be virtual and shaped for these troubled times

Look for digital sessions this fall about the coronavirus, the upshot of the George Floyd protests, the presidential election and more as our annual ideas festival looks to see how to reach a better state of Wisconsin.

Rather than hyperpartisans, those most likely to buy conspiracies are those who don’t follow the news and assume it will “find them,” suggests new University of Wisconsin-Madison research.

George W. Bush: We rise or fall together — and we are determined to rise

This is a solemn and challenging time in the life of our nation and world. A remorseless, invisible enemy threatens the elderly and vulnerable…

It has now been over 400 days since Tara Reade has come forward with serious allegations of sexual assault by Joe Biden when she worked as an aide in his U.S. Senate office. Where are the Democrats’ calls to believe all women now?