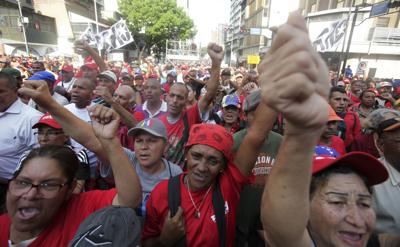 The COVID-19 pandemic has thrust the United States into crisis, and its citizenry is in desperate need of medical, economic and moral support. What the people do not need, or want, is another war.

Yet, over the past several weeks, the federal government has been amassing a significant military force in the Caribbean — the largest U.S. military operations in the region in 30 years — intensifying its pressure on Venezuelan President Nicolas Maduro. War, it seems, could be on the horizon.

The Trump administration has made no secret about its desire to oust Maduro, who has been characterized by President Donald Trump as a dictator. Trump has continued and expanded economic sanctions initiated during the George W. Bush administration, in addition to adding his own. His administration also supported the claims of Venezuelan politician Juan Guaido to the presidency in 2019. And, just last month, the U.S. Justice Department charged Maduro with drug trafficking and narcoterrorism.

Despite all this, Maduro remains in charge of Venezuela. But with Venezuela’s economy collapsed after years of sanction pressure, leaving the country vulnerable to a public health crisis, the Trump administration seems to be considering giving regime change another go.

The United States has built up a tremendous force in the waters north of the country. “We’re deploying additional Navy destroyers, combat ships, aircraft and helicopters; Coast Guard cutters; and Air Force surveillance aircraft, doubling our capabilities in the region,” Trump announced abruptly during an April 1 coronavirus briefing at the White House.

Officials at the Defense Department reportedly opposed the deployment, as the military has struggled with the spread of COVID-19. But their concerns were ignored.

The president claims the operation is meant to combat drug trafficking, primarily cocaine smuggling, but such a force has never been previously deployed solely for drugs. And data from the U.S. government’s own Consolidated Counterdrug Database shows that Venezuela is not a primary transit country for U.S.-bound cocaine. Six times as much cocaine passed through Guatemala in recent years.

Venezuela is a deeply troubled country. Its economic crisis predates COVID-19 and its people will likely suffer even more as medical facilities face shortages of supplies. But Venezuela and Nicolas Maduro are no threat to the United States, its economy or its people.

To launch a needless war during a time of domestic crisis would be folly likely to result in failure or unintended consequences that might be worse than the present regime.

And this folly would cost the country a great deal in money and blood at a time when it should not sacrifice either for any but the clearest and greatest cause.

Our government should focus on the more pressing needs of its own people, who are trying to make it through the most significant crisis the country has faced in decades.

Lila Hemlin of Madison is this week’s You Toon winner.

Last week, while hoping to lose myself in Facebook memes, I came across a thread I couldn’t ignore — early care educators sharing tips on how …

Whatever your grievance — economic, health or both — we need leadership that listens to science and takes action, at local, state and federal levels.