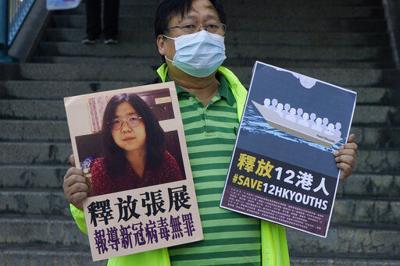 More than 1,000 law enforcement officers swept through Hong Kong on Jan. 6, arresting 53 residents under Beijing’s new national security law. Those detained could face up to life in prison for the “subversive” act of holding a primary vote in 2019 for legislative elections that were later postponed.

As of Jan. 7, the investigation was underway.

Anyone who thought Beijing would uphold its promises to allow Hong Kong to retain its way of life was merely fooling himself. This latest act of authoritarian aggression is merely another step in the total subversion of the region, boosted in 2020 by the passage of the much-maligned Hong Kong national security law.

More than that, it must be countered.

The Chinese Communist Party should not forcefully subjugate Hong Kong citizens for daring to preserve democratic processes and ideals left over from British rule.

This is nothing new — U.S. tensions with China have continued to escalate in recent years, with concerns about data mining and intellectual property at the front of a long list of worrisome issues. Hong Kong has emerged as a flashpoint as well. Under President Donald Trump, the U.S. imposed sanctions on Hong Kong and Chinese officials for sabotaging freedoms in the city. Special trade privileges have ended for the city as well, signaling a shift in Hong Kong’s status as having a democratic toehold in a communist land as it falls further under authoritarian rule.

President-elect Joe Biden’s nominee for secretary of state, Antony Blinken, wrote in a tweet that “the sweeping arrests of pro-democracy demonstrators are an assault on those bravely advocating for universal rights. The Biden-Harris administration will stand with the people of Hong Kong and against Beijing’s crackdown on democracy.”

Details on how the administration will stand against Beijing are forthcoming, presumably.

More broadly, the Trump administration’s actions against China have been largely unilateral, including the attempted delisting of Chinese companies on the New York Stock Exchange, blacklisting technology firms and prohibiting transactions with Chinese-connected apps.

Just get the vaccine into arms already

The incoming administration has indicated that it will aim for a more multilateral coalition to curb Chinese aggression and power, beginning with the exclusion of Chinese leader Xi Jinping from Biden’s plans for a “Summit for Democracy.”

Trump was right to take a strong stance against the behemoth, but Biden’s teased multilateral strategy will be necessary to counter China’s own maneuvering and coalition building moving forward. Biden’s policy must not be toothless but pugnaciously wolfish.

While remaining competitive and protecting American data and security is a top priority, an ultimate goal for any policy must be to end such gross violations of human rights as China now routinely inflicts on its citizens, including those in Hong Kong.

The world watches in dismay. Biden and the United States must build the democratic coalition against China’s quest for global dominance.

"Killing passenger rail was raw politics at its worst — a patented Walker divide and conquer scheme."

"No one did more to poison the American political discourse than Limbaugh."

A bipartisan task force led by State Treasurer Sarah Godlewski has sound recommendations and Gov. Tony Evers’ proposed budget has strong ideas, too. It’s crucial for Wisconsin to follow up to keep tens of thousands of seniors out of poverty in coming years.

Fort Worth Star-Telegram: While you're freezing in your Texas home, Sen. Ted Cruz took off for Cancun. Really

While Texas is freezing, the Lone Star

Rep. Barbara Dittrich: Pot is not the panacea being presented to the public

"Americans are smart to question this push, examine the facts and slow down this process before it’s too late."

Orlando Sentinel: William Buckley would weep at the CPAC circus coming to Orlando

Instead of fiscal responsibility and trade, GOP is stuck on conspiracies, grievance