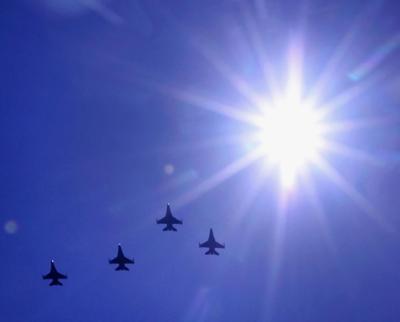 No press releases were issued. No social media posts or press conferences occurred.

On the morning of Friday, July 19, a transformer blew at the Madison Gas and Electric substation in Downtown Madison. A combination of electricity and oil required the use of special firefighting foam to control the fire, prevent further damage and potentially loss of life. The Madison Fire Department incident commander requested the 115th Fighter Wing fire emergency services to respond to the fire because of the need to use foam to extinguish the fire.

On returning from the MGE fire, the 115th Fighter Wing fire emergency services had to respond to a civil aviation incident at the airport. A private aircraft landed without functioning landing gear. Luckily, no one was injured. The fire team responded to the incident and then removed the aircraft from the runway.

Later that evening, dangerous storms produced tornadoes. Damaging winds tore through northern Wisconsin. The damage was so severe that Gov. Tony Evers declared a statewide emergency and activated the Wisconsin National Guard. Members of the 115th Fighter Wing volunteered for active duty and were sent to northern Wisconsin. With little notice, they left their homes and families and have spent nearly a month stationed in Polk, Barron and Langlade counties. They have cleared trees that blocked over 50 miles of roads and hauled away more than 1,500 truckloads of debris.

Also that same weekend in July, 250 airmen with the 115th Fighter Wing said goodbye to their family and friends and traveled 7,000 miles to Afghanistan, where they will conduct flying missions in support of Operation Freedom’s Sentinel and NATO’s Resolute Support. There they will be deployed for several months supporting the Wisconsin National Guard’s federal mission.

It was just another weekend for the 115th Fighter Wing. We are very fortunate to count the men and women of this wing as our friends, coworkers and neighbors. For 71 years they have been stationed in Madison, performing similar missions without headlines and fanfare, simultaneously fulfilling their domestic and federal missions.

Thanks to the 115th Fighter Wing for all it does for the Madison community, our state and nation. We look forward to the wing remaining a vital part of our community as it receives its new mission of flying F-35 fighter jets.

Richter is a member of the board of directors of the Badger Air Community Council and former athletic director for UW-Madison: badgerair.org.

Business group says there is little opposition, but encourages people to voice support; alders say low-income residents may be left out.

The State Journal has reported on trace amounts of perflourinated (PFAS) compounds being found in water samples from 10 municipal wells in Madison.

Gov. Scott Walker says he is eager to hear the "sound of freedom."

Those affected by F-35 will need help -- Mike Shivers

I read Pat Richter's opinion piece, "Just another weekend for the 115th Fighter Wing," in the Aug. 26 State Journal, and it was very good. How…