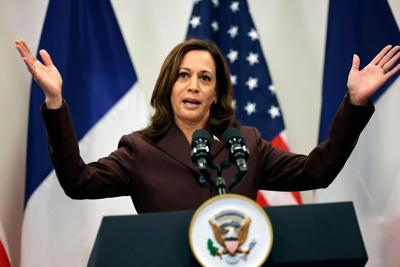 That is lower than her four predecessors in their first years. It’s also lower than the approval rating for President Joe Biden, who sits at 38%, and former President Donald Trump as he was leaving office in January, when he was polling around 41%.

Despite the best efforts of the Democratic political machine calling attention as much as possible to the demographically historic nature of her vice presidency, her year as Veep has been nothing short of a dud.

After being tasked with leading the administration’s efforts to address the migration crisis at the country’s southern border, Harris was criticized for not actually visiting the border. When asked about that, Harris gave a less than inspiring answer, saying, “And I haven’t been to Europe. I mean, I don’t understand the point you are making.”

Harris tried taking credit for the withdrawal of troops from Afghanistan, noting that she was “last person in the room” with Biden while he was making the decision. And then as Americans were stranded in Afghanistan, she was back in California campaigning for Gov. Gavin Newsom.

Just how bad Harris is doing should be a surprise to no one familiar with her career in California.

The former California attorney general and United States senator has found it difficult to navigate not only her past as a tough-on-crime prosecutor in a party that’s embraced criminal justice reform, but her persistent gaffes and stories about dysfunction in her inner circle as well.

As San Francisco district attorney, her office was condemned by a Superior Court judge for “(violating) defendants’ rights by hiding damaging information about a police drug lab technician” who admitted tainting evidence, “and was indifferent to demands that it account for its failings,” as the San Francisco Chronicle reported in 2010.

Among other failures as California attorney general, Harris fought the release of Daniel Larsen, who was wrongly incarcerated for over a decade, even after he was exonerated, on the grounds that Larsen hadn’t proved his innocence fast enough.

With a record like that, it was unsurprising that Harris never really caught on as a presidential candidate.

Harris’ run for president peaked on the day she announced her candidacy, and after grabbing headlines for slamming Biden in a debate as someone cozying up to racists, she quickly fizzled out. By the time Harris withdrew from the race, support for her presidential campaign among Californians was down in the single digits.

But she was politically rescued by Biden, who inexplicably chose her as his running mate.

Now, as vice president, Harris has managed to achieve a lower approval rating than former President Donald Trump achieved in the wake of the Jan. 6 attack on the Capitol, when a Quinnipiac University poll put his approval at 33%. ...

It’s hard to imagine things getting much worse for her, but Harris’ unyielding ambition and penchant for cringeworthy moments means she always finds a way. The vice presidency has few responsibilities, but Harris would do well to take those seriously by focusing on competency instead of her sure-to-be disastrous next run for president.

Jonah Goldberg: When ‘Vice President Harris’ became inevitable, trouble was sure to follow

Things have not gone well for Vice President Kamala Harris. Not only is she less popular than her boss, but according to one recent poll, she …

The SAT and ACT college admission exams are riddled with problems in their current form. Though they can be helpful predictors of whether stud…

For 26 years I was dedicated to the work of attracting visitors, conventions and sporting events to Madison. During this time, the city, Dane …

The combination of the Trump cult, white nationalism, irrationalism and 24/7 right-wing media represents a clear and present danger

St. Louis Post-Dispatch: UFOs, UAPs — whatever they're called, the US needs to know what they are

Whatever they're called, those strange

December snow lightly coats much of the Northeast